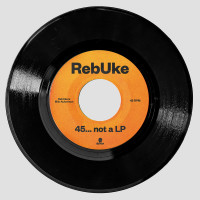 RebUke is literally just legendary Descendents’ frontman, Milo Ackerman, playing the ukulele, and before you stop reading because you just saw the word ukulele, let me assure you that this isn’t a lot of annoyingly high pitched ukulele music. In fact, Aukerman plays it a bit like an acoustic guitar, and the uke even gets an assist from an electric guitar at a few points. If anything, using a ukulele is mostly just a gimmick for a quick solo project to put together, giving Aukerman an outlet for songs that he wanted to put on the new Descendents album but, while isolated by COVID, he needed to find another format for that. And all three uke-punk songs are about the same topic: Aukerman’s pure, unadulterated, certified organic hatred for Donald J. Trump.

Aukerman, who says he intentionally shies away from political songs, actually manages to put together some good political music. Opening track, “On You,” is a more general takedown of Trump’s politics and personality. The other two songs have slightly different angles, with “Hindsight 2020” focusing on the election and “Royal Flush” accusing Trump of being a monarchist and subverting the democratic process to try and simply rule as a king or dictator. “Royal Flush” also serves as an interesting tribute to the Sex Pistols’ “Anarchy in the UK,” using the same format for the lyrics and some obvious references, perhaps mocking Sex Pistols’Johnny Rotten for supporting Trump.

While Aukerman might not love writing political songs, and I understand his reasoning for it, he’s always been good at it, as witnessed by one of my favorite Descendents tracks, “‘Merica.” He always shows an academic’s political insight and a punk rocker’s snotty anger. 45…Not a LP is a fine example of his songwriting and, while hearing punk played on a ukulele is an interesting novelty, it’s also simple enough instrumentation that it pulls the focus to Aukerman’s lyrics, which are some of his strongest. All in all, it’s a solid three-song EP that’s worth listening at least a few times while you prepare for battle this Election Day.

The Queers: Save The World