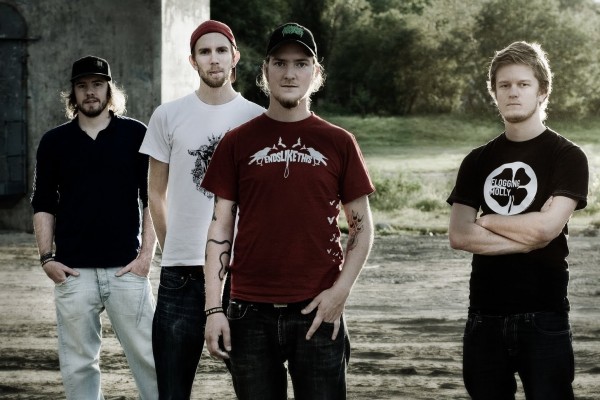 Back in the beginning of the 00's Pete and I met for the first time. We realized we shared a passion for the same type of punk rock. A passion that none of our earlier friends had shared with us. I told Pete I knew a guy from my elementary school that played drums and was into hardcore and that the three of us ought to start a band. Said and done.

We started rehearsing in April of 2003 playing covers from bands we shared a liking for. Soon we started writing our own material and at the end of that same year we recorded our first demo followed by our first show in may of 2004.

As the years went by we put out a few more releases by ourselves but we didn't play a lot of shows. The reason why is somewhat unclear but I guess we were simply unexperienced and didn't really know how to get shows. Especially playing a type of music that noone was listening to!

In 2007, after releasing our first full length album Outside of Calamity, Eric left the band. He said he didn't believe in the music we were playing, but since me and Pete did, we decided not to break up. Finding a new drummer was however no easy task. Determined to go on we recorded our self titled EP, with programmed drums, in 2008 and soon after Sam joined as our second guitarist.

We found a guy called Markus from PiteÃ¥ that we convinced to go with us to play the drums. After driving across half of Europe to play a total of six shows, losing shitloads of money, we knew for sure that we wanted to tour even more! We followed up with a tour of the UK in late 2009, getting our first label–released album in 2010 followed by another tour of Europe. All of this with a different drummer each time! Andy Dazzler is however marked as our official one at the moment since he played the last tour.