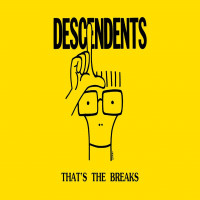 "That's the Breaks," which appears to be a stand-alone digital single, is one of the Descendents most immature releases. It has no nuance. It has no ambiguity. It has no room for interpretation. The sole point is to kick Donald Trump in his ass on the way out the door and to say he has small hands and a small weenie. So basically, it's a fantastic song.

While Milo Goes to College was coated in first (or second wave ) punk grime, by the time 1985's I don't want to Grow Up rolled around, the band had become slicker, poppier, and brighter. Essentially they had become a pop-punk band (or maybe they even invented the concept of such) and many of their songs focused on personal issues - heartbreak, depression, loneliness. Now true, they did maintain a political bend. The 'Merican EP underscored that Descendents weren't just a lovey-dovey band. But the, dare I say, gentler, less cutting songs seemed to be their main tag.

It's nice to be reminded that the Descendents really do have some sharp teeth. "Breaks" is so powerful because it is so direct and so literal. Sometimes an explosion of rage without academic analysis just feels right- and sometimes it says more than a more poetic draft ever could. All of the early Dangerhouse singles prove this and so does this standalone track.

Yet, the tune is strictly rage. as Punknews' Adam White pointed out to me, there's a bit of fun and glee here. It is to mock the size of Trumps hands, only because he seems to take such a pointless issue as having deeper meaning and only because HE has made a literal political career out of making fun of people and doing nothing else. Rarely in life do we get dramatic just-desserts like this and it is sweet. and plus, it helps that the band, even beyond their fifth decades, still have a bit of that school boy mischief and charm.

The Descendents are a punk band. This is a straight-up punk track. It's fast. It's blunt. It's beautiful... just remember, the battle isn't over yet.