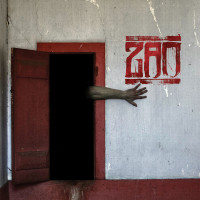 The new release by Zao, the Crimson Corridor, is probably not what you'd expect based on experience. I had not thought about them since high school, when the older hardcore kids demanded I listen to Liberate Te Ex Inferis. It was very intense and skillful, but the band was also very, very religious and hit you over the head with it. They did do a concept album about God abandoning humanity. To me then, it seemed odd a rebellious subculture had such a religious element. I guess this is why most Christian hardcore bands get evasive and make suspiciously specific denials about their beliefs if asked in interviews. But if you think about it, its not any different from vegans, straight edge people, anti-racists, racists, left wing activists who are socialist labor union members, right wing punks or whoever claiming moral superiority and trying to press their beliefs on others in punk.

But Zao now is mostly different members and no longer claims religious piety. They still lound like a 90s/ early 2000s HXC or metalcore band, with screaming and low moaning dirges and breakdowns and complex walls of sound as intro tracks. So without religious preaching, what do they do for lyrics? The current lead vox's personal problems. So now they're more like Blacklisted than Strongarm basically. The Crimson Corridor song itself is about his internal suffering. The track Ship of Theseus is a rather blunt metaphor for how much the band is not what it started out as, and I'm not explaining that one even though I know more about Greek myths than the Bible. Do your own research.

To me, though, it makes it more enjoyable. Since I'm not religious, and didn't want to hear about it, I can focus on their music and its very skilled hardcore. Alot of the bands from the huge explosion of hardcore in the early 2000s are gone, so I haven't heard this kind of music in a while. The guitar work on the breakdowns on Transitions are very good. Nothing's Form is probably the best track on the album.

I enjoyed it. Your mileage may vary on the uncharacteristic lack of religious fervor. Some may find Christian hardcore to be like a dreadlocked youth pastor trying too hard to "rap with them" about Jesus and be more able to enjoy some good hardcore without being preached to. Others may find it a selling out or forsaking of faith, apostasy etc. What profit a band that gains a gig but loses its soul? If you demand Deuteronomy and John Milton in your hardcore, there's the rest of their discography I suppose.