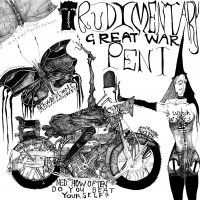 In this age of mass information, where we even know what our favorite rockstars had for breakfast thanks to Instagram, it’s wonderful and a testament to the power of Rudimentary Peni that they are still nearly as much an enigma as they were in the early ‘80s. Twelve years after the release of the single track, CD single “Wilfred Owen the Chances,” the band suddenly returns with a new LP- The Great War… yet, according to early press releases, the album was recorded years ago and locked away… why? The album has scant few credits. Vocalist/Guitarist Nick Blinko is audibly on the release, but, are bassist Grant Matthews and drummer Jon Greville there? Who knows?! And it yet another twist, the lyrics of the album seem to nearly all be adapted from the poems of Wilfred Owns about World War 1.

In that way, the album is sort of a punchier sister-album to Cacophony. While that album was a sprawling complex opus wherein Blinko inhabited HP Lovecraft’s body and sang from there, here, RP take the views of Owens and lock them into modern era Peni punk punchiness. It works really well. For one thing, the band is pretty much as savage as ever. Later day Peni releases usually find Blinko kicking out a simple, but massive riff while he howls a single line over the din. But here, the entire band seems looser, rougher, and it sounds like they are falling apart at the seams- in a good way that is. Just as a great deal of Peni releases focus on death and depression, the band takes Owen’s lamentation of war and put it over a bridge of collapsing sonic discord. Being that WWI was the first modern war, where older techniques gave way to newer “inventions,” the fighting was particularly gruesome. This album has a loud, messy, combustible sound, both lending force to the grisly detail, and giving the album a texture we haven’t heard from the band in some time.

It should be surprising, but it isn’t, at how well these lyrics lock into modern times. Sure, Owens was talking about the pointlessness of war and how it’s realty controlled by those at the top, but these sentiments are in fact even stronger now… that is, Vietnam, Iraq, and a thousand other conflicts which are even more questionable have happened since then.

One should point out though, that while these lyrics are dark and depressing, there is a great, albeit often twisted, poetic skill here. That is, in true RP fashion, it’s not just ”war is bad!” Rather, look to “Path of Glory,” where Blinko details, in his classic ragged-ghoul voice, all the atrocities and horrors in field combat, before howling out in grim-salute, “THIS is the path to GLORY!” It’s a chilling and clever. Even if these lyrics aren’t Blinko’s own and are adapted, it’s sly that he’s able to maneuver such poetry into such a subject.

And yet again, RP emerges from the murk to strike a deft blow, before retreating back into the blackness without any explanation. It’s heartening to know that the band is still around, at least in some sort, and they are still making music that is unique as it is fantastic, and frankly, the magic is still there and sparking at full power. Is there a future for the mysterious Rudimentary Peni going forward? Well, if we adapt a Blinko-esque perspective, we could ask, is there a future for any of us?