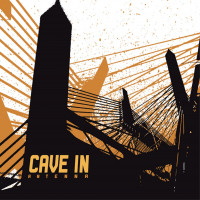 We have a very interesting band here, with Cave In. They've come a long way since their hardcore days, and with this, their major label debut, I wasn't too sure what to expect. My best friend's uncle is the guitar player in the band, so I have the inside track on their newest album (well, not really, except for the fact that I got to hear it a bit before the release date).

The album starts off with "Stained Silver", a dark and powerful track that sets the tone for the entire album. It's very musical, very interesting - powerful drum rolls back the simple slowly strummed guitar chords, building up into the chorus. The structure of the song is pretty simple -- intro, verse, chorus, etc. But the music is beautiful, and the song is very artistic. Obviously, this isn't the hardcore you (were not) expecting from these guys (assuming you've been gone the past few years and didn't realize these guys decided to go the direction of Pink Floyd instead of screaming hardcore).

The entire album is very, very solid. It's definately not punk, but it's not quite commerical either. With the signing to a major label comes the expectations of commercial success - whether you want to believe it or not, your favorite indie artist, when they sign to a label affiliated with the Big 5, are going to produce songs that the big wigs are hoping will get massive airplay on the radio, or be a hit at least (selling 250,000 albums is only decent of course!). I don't know if that will happen with Cave-In's album, because while it's not a harsh sound, it's not commericial sounding enough to fit on alternative rock stations for the most part. What this album is though, is Cave In's best effort yet. It's got great variation to it, a sound that is very unique to them, and the recordings sound like they're at the top of their game.

Something that makes a great album, is the middle parts. So many times, an artist will put their best songs at the start of an album, and usually put another killer song at the end to round it off - hoping the listener will have a good taste in their mouth after they get done listening. The middle section of this album is fantastic, tracks 5 and 6 are two that standout in my mind. "Beautiful Son" is a very slow and very melodic song, but it's not boring at all. It sort of reminds me of Radiohead, musically at least. Definately not similar to the band, but I could hear some Johnny Greenwood in the background there, making this a powerful track. After that song comes to an end, it's followed up by the 8 minute epic song "Seafrost". The bass line in this song is killer, and remains a potent part of the song the entire way through. Lots of effects in this song too, but very tastefully done. When you finish listening to the song, at least for me, I get that "wow" type of feeling.

After a couple of slower downbeat tempo songs, you get "Rubber and Glue". It's much more upbeat and you have the tendency to tap your foot or slightly bang your head when it comes on. This song shows how well Cave-In can do everything they're attempting on this album. They go from slow, to intense, to upbeat and rocking.

There isn't really a song I dislike on this album, and it's got a great flow from beginning to end. It's not the type of album you notice when you put it on as background music, it's the type of album that, when it's done, you think "wow that was quick". It's also a type of album you can sit down and listen to intently, and thoroughly enjoy it. I've been listening to this album non-stop the last couple of weeks.

Cave-In attempted on Jupiter, and the EP's following them, a type of sound. They achieved that sound pretty good, but with each following release, they were getting closer and closer to the solid and amazing types of music that appear on Antenna. This is a band to follow, and I wonder what they are going to do after this album. I don't believe it can be topped, so perhaps they'll go a different direction. Either way, it's bound to be good. And a note to the people who will immediately flag this band and album as being overrated: Sometimes, bands are called overrated for a reason - it's because they make great music. It's not their fault they're compared to everyone from Pink Floyd to Radiohead (see above part of this review) -- let the music speak for itself. And beautiful music, this is.