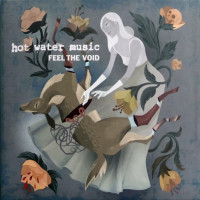 Much of the press surrounding Hot Water Music’s 9th studio release, Feel the Void, has been spent providing context for the release: singer and guitarist Chris Wollard’s sudden departure from and subsequent reunification with the band, The Flatliners singer and guitarist Chris Cresswell stepping in at the last minute to fill in at Fest and later joining the band full time, recording and writing music during stay-at-home restrictions brought on by the COVID-19 pandemic, and the band’s decision to reunite with producer Brian McTernan, the producer behind some of the band’s most beloved releases. To be clear, this is necessary context. A stalwart, legendary member of the post-hardcore scene like Hot Water Music deserves to have as much digital ink spilled about its history and this album’s place in it. However, the purpose of this review is to highlight the last point: how McTernan has created a soundscape that captures Hot Water Music sounding their absolute best, and about the theme of reunification.

The album opens with the mid-tempo “Another Breath,” a song aptly named, not only for the ways that this track breathes new life into the band’s career, but as a call to action for the rest of us navigating the uncertainty caused by the COVID-19 pandemic. The subtle references to the state of the world since the pandemic are citational without beating the audience over the head with explicit lyrics about the pandemic. The track inhales as amplifier feedback and noise fades into the soundscape. Chuck Ragan’s signature snarl, one that is at once both abrasive and aggressive, yet warm and comforting, enters the mix. The fidelity of the mix is so full and human-sounding that the listener can practically hear the beads of spit collecting on the pop screen in the studio as Chuck sings. “We’re taken alive/ Holding on to a shallow wall/ Shaking off the will to die alone/ Tied and tethered down/” he growls over drummer George Rebelo’s sparse yet powerful drum parts. It’s cliché at this point to make a whiskey-soaked metaphor about Chuck’s vocal timbre, but dammit if it isn’t cliché for a reason. As Chuck finishes the opening stanza with “We scratch out the eyes,” the song exhales into a verse section that is laden with dissonant guitars punctuated by the rhythm section’s syncopation. By the time the Chuck is joined by Chris and Chris providing background vocals shouted in call-and-response form, the listener is welcomed back by the soundscape they’ve spent thirty-ish years learning to love: this is Hot Water Music sounding their best.

While McTernan’s era is known for creating the band’s most commercially successful albums, this isn’t a simple rehashing of that history. The fourth track, “Habitual,” certainly sounds like a long-anticipated sequel to Caution’s “Wayfarer,” but it’s hardly a retread. Like “Wayfarer,” the track begins with palm-muted guitars, slowly building in intensity and volume before arriving at a sing-along chorus that will certainly invite raised fists, spilled PBRs, and entirely too many stage dives at future live performances. What’s remarkable is how well the live show is captured in this studio recording. For perhaps the first time in the band’s career, the sound on record comes close to capturing the magic of the show on stage.

The album throws a bone to fans of “the old stuff” as well: “Newtown Scraper,” the third track on the record, is more of an old school-style Hot Water Music jam than it is one of the anthems they became known for in the latter part of their career. The track begins with Jason Black’s bass tone on full display; a tone that can best be described metaphorically as the best chocolate chip cookie: crunchy on the outside, warm and gooey on the inside, and something you can never quite get enough of. As Rebelo and Black lay down what has become a signature rhythm section groove, hauntingly sparse guitars introduce Chris Wollard’s howl to the mix. There’s always been a subtle beauty in Wollard’s songs, they’re understated yet powerful, experimental yet comforting. This track is no different. If you close your eyes, you can almost see this jam being hammered out in a hot sweaty rehearsal space in Gainesville by a much younger version of this band.

Fans of Hot Water Music and “orgcore” veterans more broadly have been wondering if Chris Cresswell would contribute any lead vocals to Hot Water Music as their newest release. I am happy to report that not only is Cresswell’s contribution, “Turn the Dial,” a welcome part of the album, but a song that many fans should hope makes its way into the live set. Much like food combinations that have to be tried to be enjoyed – a slice of cheese on apple pie, pineapple on pizza, and (so I’m told) a cinnamon roll in a bowl of chili – Cresswell’s contribution adds a touch of sweetness to Hot Water Music’s savory soundscape. In what I will lovingly call “Flat Water Music,” the track brings Cresswell’s signature talent for writing catchy, anthemic melodies with somber lyrics to the forefront. It’s amazing how well the track works, and how much it is greater than the sum of its parts. If you didn’t know that Cresswell was new to the band, you would think he’d always been in the band.

At Fest 19, the first Fest held in Gainesville since the COVID-19 pandemic began, Hot Water Music was joined on-stage by Chris Wollard’s son, who surprised the band and everybody in the audience, to sing “Trusty Chords.” From my point of view in the audience, the moment seemed quite emotional for Wollard, who watched the set from the side stage of Bo Diddley Plaza, Fest’s “main stage.” The overwhelming sense of emotion was matched in the audience. I don’t think I’ve ever felt an audience immediately understand the gravity of a situation largely happening side stage. For those of you who weren’t able to make it to Fest 19, this album is a sonic representation of that moment in time. It's been a long few years for most of us, and in many ways this album recognizes that and respects our collective struggle, hurt, and longing for connection. This album doesn’t do all too much that hasn’t been done on a Hot Water Music album before. I don’t think any new fans will fall in love with the band over this album, but I’d argue that Feel the Void is certainly their most accessible album to date.

But it doesn’t need to be something new. As a punk in my 30s, I have had quite a bit of experience reconnecting with old friends recently. As many of you know, there are always those friendships that pick things up from where they left off, no matter how long it has been since meetings. These reunions always leave me wondering two things: 1) why it’s been so long since we last hung out, and 2) how we can reconnect so seamlessly without missing a beat. In many ways, this album is a sonic expression of that friendship dynamic. In an era where many of us have spent time watching helplessly as world events unfold on the other side of our screens, as stay-at-home orders have reconfigured our social lives and interpersonal relationships, and as the very livelihoods of the artists we grew to love were threatened at the very time we needed them the most, it is an absolute joy to hang out with Hot Water Music again.