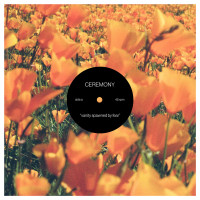 At this point, the only reason to mention that Ceremony has left hardcore is that it’s no longer worth mentioning. The band has been swimming in post-punk (and even post-disco!) seas for about a decade now and it seems that’s where they want spend the rest of their days. When the band first broke beyond the fast and furious, it seemed like they wanted to be a band that could do anything at any time like, say, the Residents or Psychic TV or Zappa or Fucked Up.

But since then, the band has released various forays into 80s influenced pastiches. Zoohad sort of a Gang of Four thing going on. L-Shaped Man nodded towards Joy Division and early new Order. My favorite of the later era, In the Spirit World Now sort of bent towards Gary Numan and Visage (despite the fact that the band maddeningly claimed Numan wasn’t really a reference point… and despite the fact they even more maddeningly covered him on that tour! ARRG!!!) In fact, the “Synthetic” re-do of Spirit World was especially effective with its expert repositioning of 80s synth music. So, because the band was morphing from one sub-genre to the next, and then doing warped out versions of their own songs it seemed that they wanted to be a band that mutated into something new with every release.

But, I’m not sure that’s the case. On the new 12-inch single, Ceremony flip between the direct and abstract very much in the way that they flip between catchy and avant-garde- but it all seems anchored in the later day cool, smooth, post-punk form. That is, “new Ceremony” isn’t the “latest” iteration of the band, it’s their final form.

The a-side finds the band again picking from the Patrick Nagle era. The twinkling guitar might have a sort of reference to Television or even Gang of Four, but between singer Ross Farrar’s cooed vocals and the throbbing bass, there’s as much Depeche Mode and Duran Duran here as anything else. That’s not a bad thing and the tune does have a danceable catchiness. Certainly, the song could be played in a dance club. And on top of that, the song’s central conceit “Vanity spawned by fear” is remarkably observant analysis of a lot of people out there (especially people in the arts) and I’m not sure that exact concept has ever been expressed in music before- or if it has, it hasn’t been expressed so succinctly. I also really like the blazing sax on the track’s second half. Loud, fast saxes have been used in punk before with X-Ray Spex and Downtown Boys, but you’d be hard pressed to find the Kenny G style anywhere else on Relapse.

Flip side “California Poppy” is more a song deconstruction. It’s not much more than a soft musical backing with Farrar’s poetry placed on top. When Farrar closed out recent Ceremony tours, his poetry seemed more literal whereas here, there’s more of a focus on imagery than linear thinking. That is to say, I don’t know what these lyrics are about and I like that the band is willing to drop abstract lines and let the listener assemble the parts as s/he will. Still, the song feels somewhat slight. You could make the argument that on singles, b-sides are where a band should have no fetters and can really do whatever they want. But in that case, I’m not blown away by weirdness or wild experimentation. “California Poppy” isn’t in of itself subpar, I think it suffers from positioning. Were it dropped on an album between a few punchier tracks, I think its calm would be much more effective and make the track a bold statement, instead of a quiet one.

I do think Ceremony is capable of an amazing third-act (something very few punk bands are able to achieve), but to do so, I think they need to keep moving before becoming too comfortable in their current environs...