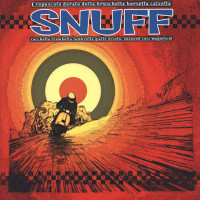 Snuff has arrived with another new album and there is not much that can be said about it at first...mind you, this is not a knock, but more of a testament to the band. It takes a bit of digging and repeat listens to grasp the darker tone of the lyrics. If you are a fan, then Crepuscolo dorato della bruschetta borsetta calzetta cacchetta trombetta lambretta giallo ossido, ooooooh così magnifico! will fit right in with their discography; Duncan Redmonds has always steered the band in the right direction and this new entry is a great addition.

On the surface, the songs are a solid set of street punk anthems with a bit of self-purported Motown leanings, a scattering of horns and organ thrown in to add a bit of flair here and there. A characteristic, almost nonsensical album title is par for the course. Plug it in to Google translate and figure it out for yourself... The album starts off with “Looks Alright From Here”; an anthemic guitar buildup sets a mood that ramps up immensely when Duncan cuts in with a well-oiled double time punk beat and yells about getting the fuck out of town and on to better things. The cover art pairs nicely with the message, a scooter speeding down the road, backed by a Mod sunset. “Green Glass Chippings” follows with its sing along lyrics about stoically dealing with what life deals you, until you are dead in the ground. The background harmonies soar and the drums punch along, almost to the point where you don’t even realize what you are singing along to. The entire album is like this; Snuff knows how to write catchy songs and slide Duncan’s sardonic lyrics in, leaving something to catch the listener off guard later during another listen. “Fish ‘n’ Chips” casually throws in mentions of mythological creatures when describing people he just doesn’t get along with: “Blemmya to the left of me. Dogheads to the right. Cyclops staring me out.”, the first being a Greek monster with its head in the middle of its chest. There are so many pulls from the ether spread throughout, that it's almost like an I Spy book where you discover something new each time. “Stolen View” makes reference to a local tragedy, assumingly, giving a more direct shout at the song topic of being disgusted at humanity at times, while leaving the nod and wink to looking up said sad incident yourself.

Horns make their first appearance on the cover of Curtis Mayfield’s “Hard Times”. The band approached writing the album during quarantine by focusing their time as a three piece, then adding organ and horns when it felt necessary; the prominence of the auxiliary instruments adds just that much more when they show up. They do the song justice and Duncan even sneaks in a quick snippet of personal hard times with: “So many hard times...Sleepin' on motel floors, Knockin' on my brother's door, Eatin' Spam and Oreos and drinkin' Thunderbird baby” during a bridge where he faintly screams it in the background. The track is definitely a highlight of the record.

None of the songs, save for the instrumental “Barba Gelata”, break the three-minute mark, so at just over twenty-five minutes, Crepuscolo... is a quick listen that loops back around in no time at all. While the songs do tend to blend together a bit, there are plenty of great melodies and riffs to keep things interesting. Snuff is and always have been a cut above the rest in terms of UK street punk, so this album is just another plus to their catalogue.

Watain: The Agony & Ecstasy of Watain