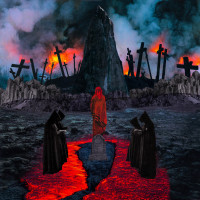 I came to Counterparts late. Really late now I think about it. I was aware of what they did but didn’t listen to a record of theirs front-to-back until 2017’s You’re Not You Anymore. It was immediately clear that Brendan Murphy (who was the sole remaining founding member at the time), and company offered something rather different from the hardcore I typically listened to at the time. Though the template was familiar, the themes and delivery had more in common with the more emo-adjacent stuff I was listening to than Incendiary’s Thousand Yard Stare for example, which came out mere months before You’re Not You Anymore. As a person who frequently, gleefully, tearfully revisits their emo side between hardcore and metal bludgeoning, this combination made me an immediate fan. The fact that Counterparts also have a penchant for a shamelessly emotive lead guitar tone/line topped it off for me.

I mentioned earlier that Brendan Murphy was at one point the sole remaining founding member of Counterparts. That’s no longer the case, with Jesse Doreen (who was a member for ten years from the band’s formation) coming back in to take up lead guitar duties again. There’s no huge departure in style to be honest, but for some reason I do feel like it brings something. To be fair, the most recent point at which a current member was introduced to the fray was in 2017, so it’s not like this is a group of strangers. But the frequent lineup changes, do add a layer of context to the sense of vulnerability that Brendan Murphy exudes in his every performance. For my money, the authenticity that he brings to his performances are what separates Counterparts from other bands in the same oeuvre. It takes a particular type of person to be able to bellow the things that Murphy does, with every ounce of heart he has, to a crowd or microphone. He gives himself over to his audience, lock, stock, and barrel. When he screams about his ‘promise to protect you / until the day I die’ there is no atom in my body that questions how much he means it. And in a genre where some bands trade off tough-guy posturing, Counterparts have a seemingly unlikely ace up their sleeve in Murphy and the returning Doreen, his lead playing complenting Brendan perfectly.

To step away from the lyrical and vocal approach for a second, I personally think that the template that Counterparts operate within (and I don’t wish that to sound reductive, but it is relatively formulaic) has been almost perfected at this point. Within what they do, there are propulsive moments, breakdowns, genuinely bleak passages, dynamics (to a point) and a beguiling smattering of melodicism that really helps the record from becoming stale at any point. Reading that back, even the analysis sounds cold and unreasonable when backed by the record, listening to it as I am, whilst writing. I suppose the easiest way to explain it is to say that the emotive aspect that runs through every portion of the record like XXX really work. They land, every time. The title track for example, mixes tempos, vocal effects, sonic heft, and various other things but maintains a mood throughout. I find it fascinating and rewarding.

On more than one occasion in the last week, I have sat, played this record and without growing tired or even vaguely uninterested in it, I’ve listened to it 2-3 times through in its entirety. Admittedly it is less than 35 minutes long, but there are hardcore bands who I would petition to not exceed a 20-minute runtime. If you’re of the persuasion that doesn’t necessarily want personal vulnerability, sensitivity, or melodicism with your hardcore (and that’s totally cool), then you won’t like this. But then you probably know that already. If you are cool with those things and you want an expertly crafted record from a band who are right at the forefront of doing that thing, then you need look no further. Also, on the off-chance Brendan reads this, my condolences. I hope releasing this record helps the process.