Photo: Josh Halling
COUNTERPARTS has come quite a long way since their formation in 2007. With a fan base that has progressively expanded beyond their home province, the young artists have toured Canada relentlessly since March 2009. The bandâ€™s upward trajectory truly took off after the release of their debut full-length, Prophets, in February 2010. The Verona Records release turned heads across the country, as well as past its borders. The record proved to be an immediate hit among fans of the hardcore genre, simultaneously garnering praise from scene luminaries and newcomers. Its impact was bold and far-reaching, going so far as to earn the band several award nominations throughout Ontario. The positive response caused the bandâ€™s touring regimen to increase significantly, with a slew of tours taking place both at home and in the United States alongside prominent hardcore acts such IT PREVAILS. At a point when most bands would take time off to relax, COUNTERPARTS proved themselves once again to be as hard working as they come. In November 2010, the band released a split EP alongside Ontario-based hardcore unit Exalt. The EP was another instant hit among fans, and proved that the band still had plenty left to offer, both musically and lyrically, that had not been showcased on their debut.

In October 2011, COUNTERPARTS released The Current Will Carry Us via influential independent label Victory Records. The sophomore LP saw the band pursuing a rawer, straightforward sound, and achieving a new level of honesty through their lyrics. Tossing any idealistic rhetoric aside, the album offers listeners an extremely introspective listening experience that depicts the band in their most sincere, vulnerable state. While the album marks a clear thematic departure from its predecessor, its unrestrained aggression makes an emotional impact thatâ€™s even more genuine. The recordâ€™s reception easily exceeded the expectations of the band members, landing them a selection as one of Alternative Pressâ€™ â€œ100 Bands You Need To Know In 2012â€ and propelled them onto European tours, in which they would bring their unforgettable live presence to listeners whoâ€™d spent years anxiously awaiting the opportunity.

2013 proved to be COUNTERPARTSâ€™ biggest year yet, sending them across the US, UK, and Europe in support of their third studio album, The Difference Between Hell And Home. Released on July 23rd, TDBHAH debuted at #63 on the Billboard Independent chart, #7 on the Top New Artist chart, and #95 on the Top 200 chart (CA), propelling COUNTERPARTS to the top of playlists everywhere. Received with an overwhelmingly positive response, the new album demonstrated Murphyâ€™s ability to write lyrics that encapsulate listeners in an audible diary of raw, wrought emotion from start to finish. Alternative Press agrees - â€œCOUNTERPARTS has what it takes to stretch hardcoreâ€™s boundaries.â€ Touring alongside bands August Burns Red, The Ghost Inside, Bane, and label-mates Terror, COUNTERPARTS continue to garner new fans with each performance. Delivering what Absolute Punk calls â€œrip-roaring intensity, haunting and powerful lyricism, solid song structures and vocals that guide each song forward with a remarkable sense of commandâ€, it is abundantly clear that this Canadian hardcore band is here to stay.

Keep your eyes on COUNTERPARTS in 2014. 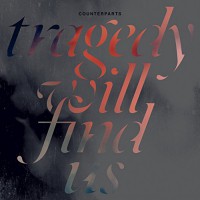 Tragedy Will Find Us