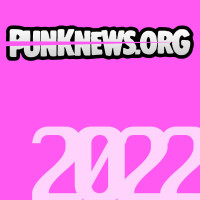 "How the world keeps on spinnin'... It goes spinnin' out of control"

Thank you for stopping by and checking out my weird picks of the year. I may say this every year, but this has been the most exhausting year ever. In the words of the Yeah Yeah Yeahs, it keeps on spinnin'... So, this year, TONS of bands have gotten stuff out and I think it was rather hard to keep track of all the new things or even say you spent enough time with each record to figure out what you liked, maybe the pandemic led to something good? (New music for a lot of folks? Who knows?)

Personally, this year, I continued my journey to self-improvement. The internet is a terrible place somewhere and I think breaks were necessary for mental health. I went back on my usual antics with traveling and ended up in Seattle and Vancouver in search of very good donuts with my number one person. My pupper is still very handsome and an old grinch these days.

When you hear that two of my favorites, Daggermouth and Shook Ones, converged and formed a new band. This news was well welcomed in these parts. Canadian punks Rest Easy, released a fantastic EP in 2021 (which ended up on my list then), this year they continued what they started a year before with a full length. The release pulls influences from sounds like Kid Dynamite or Lifetime with a sprinkle of some 7 Seconds.

Baltimore based side project Praise released their third album, All In A Dream is a shot of melodic hardcore punk. The whole album is filled with fun singable choruses and well put together rocky riffs. For followers of Dag Nasty, 7Seconds, and Husker Du.

Long running Japanese female punks Otoboke Beaver in my eyes may be akin to the same ingredients as the Powerpuff Girls (sugar, spice, and everything nice), this year they released their Super Champon which is as fast, fierce, and colorful as the album art suggests. Merging influences from metal, punk rock, riot grrl, a bit of pop, they created an album of feminist anthems singing about the ideals of social demands on Asian women in society. The entire album is a ball of pure energy that is very apparent in their live sets. “I Am Not Maternal” is literally my mantra in life. Who doesn’t love a good song about dogs?


7. The Linda Lindas: Growing Up

Growing Up is the debut release from the female punk-pop band The Linda Lindas. The ladies created a cohesive grouping of youth anthems, tackling ideas of racism, growing up and cats being cats. Fueled off the influences of iconic ladies in punk before them. Their songs are fun, youthful, and quite polished. “Oh!” and “Racist, Sexist Boy” are the two very different tracks but are fine gems on this album. I really hope these ladies are inspiring other Asian and Latinx kids that they can be and do what they want.

So-Cal rock supergroup Plosivs, dropped their debut self-titled album this March. The band featuring members of Hot Snakes/ Rocket From The Crypt, Pinback, Against Me! and Mrs. Magician. The release seems to seamlessly blend their collective 50 years of collective band experience. “Rose Waterfall” is hands down my favorite off this album.

Containing members of Small Brown Bike and The Swellers, I knew this was going to be something I would jam to. Time In the Lighthouse is a great debut sludgy post-hardcore album that leaves you craving for more.

Yeah Yeah Yeahs are back! And I like to believe Karen O is the coolest person ever and a force to be reckoned with in sequin outfits. Cool It Down is a synthy masterpiece that evokes so much magical energy.

Another longtime favorite of mine, Comeback Kid’s 7th full length release, Heavy Steps threw some heavy jams in my normal rotation of getting ready to conquer the day's normal nonsense. “Heavy Steps” and “Dead On The Fence” are my two favorites from this album, they are both heavy, breakdowns in all the right places and helps me conquer my never ending work day.


2. A Wilhelm Scream: Lose Your Delusion

I LOVE A WILHELM SCREAM and we have waited 8 years for this! In the time we have been waiting, a lot has changed in this world, and they have also found a new home with the Bay Area’s greatest Creator-Destructor Record, while the world is apparently still a dumpster fire. Lose Your Delusion was well worth the long wait and is true to the A Wilhelm Scream form while being slightly different, they are still the generator of melodic and fast punk that is infectious and will stick in your head for days. For me, this album fell instantly into a top ranking here with social commentary in “Apocalypse Porn” and “Gimmetheshakes”.

Feel the Void is a breath of fresh air to Hot Water Music. Having successfully meshing this new blended family with both Chris Wollard and Chris Cresswell on a release together. The entire release harks back an older, Caution-era vibes while introducing something new like Cresswell’s contribution of “Turn The Dial”. The songs are filled with parts to howl along with, beautiful Jason Black bass lines and tunes that gives most old Punknews readers all the feels. For any folks here, Feel the Void fits the general orgcore vibes, this is definitely something that has been in my rotation for the ENTIRE year.

Recorded in the same session as I Won't Care How You Remember Me, Old Clothes is a 4-track release in the same vein as the 2021 album. The tracks are a bit different from the material of the LP but seems familiar and works well together as a side piece.

Upon returning from summer vacation in 2018 to Japan, I found Band-Maid, a super talented all female metal band (who happens to wear maid’s outfits) from Japan that put out some catchy J rock/metal music. This year they released an 8 song EP/CD, that encompassed about a 2-year span of work. The opening track is an epic instrumental piece that starts a precedence for the rest of the EP with aggressive guitar noodling and melodic vocal progressions.

In no particular order


I hope 2023 will be less weird, more fun and hopefully we can all grow old together. Be good to each other out there. We need to be in this together to get out of this collective mess.