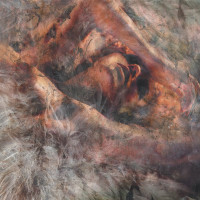 Converge has been one of the most talked about bands in the hardcore/metal scene throughout their long history. Love them or hate them, you have to at least respect them. Unloved and Weeded Out is a collection of rarities, demos, and a few live tracks put out on Jake Bannon's(founded with the help of Tre McCarthy) own label, Deathwish Inc. This collection comes complete with sleek packaging and the hardest to read list of credits I've ever seen (or in this case, not seen).

The old adage "save the best for last" apparently means nothing to Converge, as they've placed the most impressive song at the beginning of this album. Downpour (which also appears on the "Fighting Music Vol. 1" compilation) best showcases Converge's chaotic, technical style, as well as Bannon's trademark vocals. For those of you who are aren't familiar with Bannon's style, think of a banshee fronting your favorite band. Yeah, I know that's not the best description, but you get the idea. Aside from Bannon's shrieking, Converge also provides some eerily calm vocals that actually might be more likely to catch the listener off guard than the screaming. Kurt Ballou, who also mixed the tracks, provides the impressive guitar playing that fights with Bannon's vocals for your attention. The guitar playing on here ranges from speedy chaotic passages to calmer, almost melodic parts. I wouldn't call any of it pretty, but it's catchy enough to lull you into a false sense of security before it throttles you. The speedy scaling at the beginning of the tenth track, "When Forever Comes Crashing" is just one of the highlights here. Sometimes (track 2 and tracks 4-7) Ballou gets some help from Aaron Dalbec, who some of you will know from the band Bane. Although the work between the two is sparse, it does add a slightly different dynamic to the songs.

The production is generally very solid, but on tracks 8-12 it's somewhat lacking. There is a very good reason for this though; they were recorded in Kurt Ballou's basement. It's actually pretty impressive that Converge can outdo certain bands in high priced studios while playing in a basement. These demos from the "When Forever Comes Crashing" sessions actually sound just as good, if not better than the versions that made it onto the final cut. The album ends with two live tracks, the better of the two being "Locust Reign." While these two songs don't exactly showcase the insanity of seeing Converge live, they're probably the closest thing you're going to get to it on a CD.

Here's the bottom line: If you're a Converge fan, then you need to get your hands on this essential disc. If you don't know this band, and chaotic (how many times can I say the word chaotic in one review?) hardcore/metal (Nora, Dillinger Escape Plan) is your thing, you would be better off starting with a proper album (Jane Doe in particular). This isn't exactly a new full-length, but it does fill in some of the gaps in the 11 year history of one of the most influential bands in recent memory.