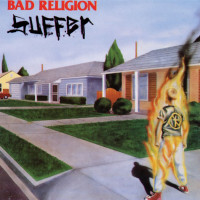 There has been a mix of brand new reviews, to the classic punk rock album to the brand new ones released. I've figured its about time I reviewed something classic - and this album is the perfect one to do.

As Fat Mike put it, this was "the album to change everything". While I'm not a punk historian, I'd have to agree. This ushered in the "modern" style of punk, which deeply influenced modern bands like [insert almost any punk band from the 90's SoCal scene].

The influential aspect to this album deserves a score of "11" itself, but what about the actual music? To tell you the truth, when I became a fan of Bad Religion, my favorite albums were Against the Grain and Generator. Their earlier works like No Control and Suffer actually had to grow on me, but that's simply because I didn't give it a chance. Let me tell you that little story... when I first got into punk rock, it was from listening to The Offspring's Americana (one of the worst albums ever made, ever, which is ironic). Then, while walking into the hardcore punk rock store known as "Fred Meyer", I saw Bad Religion's ALL AGES CD on sale for $9.99! I bought it, and the rest is history. Anyway, the reason I bring that up is because there were only two (maybe three) songs on Suffer, and I thought they were too simple, too plain sounding. Their later Epitaph albums seemed to be a lot, well, deeper sounding.

I've come to realize Suffer's brilliance though, and part of it was it's simplicity. This was a groundbreaking album, and yet its very simple. So now I actually appreciated the album, but I still didn't enjoy it that much.

Finally, I decided to really sit down and listen to it - each song with all my attention focused on it, because it was a Sunday morning and I was bored. It starts out with "You Are (The Government)", which I immediately enjoy since it was on the ALL AGES compilation (which, if you don't know, is just a 20-or-so song cd of their best songs on Epitaph, put together by Mr Brett in 1995 or so). The rest of the songs sort of blend together in my head until I hear "Suffer", which was also on ALL AGES. Again, the rest blend together until I finally hear "Do What You Want", the third song on that compilation. But as I listened to that album, the songs that blended together... they started to sound more like individual songs to me. So I decided to listen to it again, only this time with the lyrics in my hand. Singing along furiously, I realized the brilliant lyrics was one of the reasons this band stands alone as one of the greatest of all time.

Now, I'm listening to this album 3 times a day just like it's brand new and I've never heard it before. I'm completely addicted, and each time I listen I wonder to myself: "how did I not fall in love with this album the first time I heard it?". I really can't answer this.

Every single song is perfect, but in a different way. While I still think "Against the Grain" (1990) is their greatest effort, this is a fucking incredible album... and of course, it was the effort that changed everything.

Carly's Day Out: The Past Is Behind Us