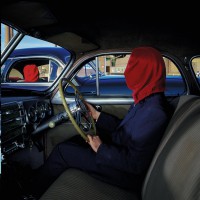 There have been many big splits over the course of American history. There was that civil war business that a few of my professors seem to think was important, the splitting of the 2003 NCAA football national championship between USC and LSU, then by far the most unfortunate split in our nation's history, that of El Paso's At The Drive-In, factioning off to form Sparta, and the far more adventurous Mars Volta. Each band has two albums now under their belt, and after hearing all four, this is definitely the pick of that litter, if not the litter of most of the musical landscape recently. Leave the hating to the real playa hatas, like Buc Nasty and Silky Johnson, because Frances The Mute will blow your mind. So give up your qualms about how pretentious this is, and how overindulgent, because given the chance, you're in for a hell of a ride.

This album packs so much music into its 77-minute duration. I hate to use the term "prog rock," because this fuses so many different styles, from jazz to Latin rhythms, punk influences to ambient spazouts. In essence, this album is supposed to be a discovery of a man's roots, in epic form, and in all truthfulness, epic could not be a better word to describe it. There's only five songs here, the last of which breaks the 30-minute mark, and thus being the longest song I've ever listened to, surpassing Pink Floyd's "Shine On You Crazy Diamond." Enough of that though, let's get into the album itself.

Opening things off, we have "Cygnusâ¦Vismund Cygnus." The song leads in with some acoustic guitar, and vocalist Cedric Bixler softly singing in a far more personal style. He's not just using big and extravagant words, so you can actually comprehend what he's saying. It definitely adds something this time around. But don't get too comfortable; before long, Cedric's trademark wail kicks in, and it's not in English. Again, I'm sure plenty of people will call it pretentious and similar things, but it adds a certain air of authenticity, with all the Latin rhythms integrated in this album. Soon after, Omar's guitar kicks in, and the clean sounds absolutely shred, before leading into some more subtle guitar work that could easily be background music for any scene in "Desperado." Around 7 minutes, the music kicks back in and Cedric's lyrical chops really show.

I count the days to find, what was left behind / Only these names I clutch / Will lead me to my home / Somehow this river marks, a wrinkled hand in mine / And every day it parts, the water into two / Mothers and feathers start, to drown the living proof / I can't remember these lakes of blood / Wrapped in a blanket, there sweats a cut .

After some more of Omar's guitar work, the song fades into some ambient noise, leading into the album's single, "The Widow." While it is the album's shortest track, it showcases Omar's talent on the guitar as well as any other point on the album, as well as it showcases the trumpet-playing ability of the Red Hot Chilli Peppers' Flea. Though, this song does present the one weak point on the album, which is the very much distorted organ in the last two minutes; it doesn't seem to fit as well as some other things might have. It does, though, lead well into the album's third track, and arguably the best, "L'Via L'Viaquez." The song infuses the Latin rhythms into the music better than any other. You can't help but feel you have your own personal mariachi band in your bedroom playing for you, complete with velvet, sequined suits and sombreros. Most of this song is sung in Spanish, and it sounds absolutely flawless. Cedric's voice has never been better. He may not be as consistently intense as back in his days in At The Drive-In, but when he is, you'll take notice. Just when the song seems to be waning a bit, Omar kicks the life back in with that same amazing guitar work that's been prevalent throughout the entire album.

The fourth track, "Miranda That Ghost Just Isn't Holy Anymore," starts out with the same ambient noise that ended "L'Via L'Viaquez," and adds some creepy howling effects as well. It truly is creepy, as the noise fully takes you and puts you in a different environment, one where your senses are acute enough to pick out every inflection in the howl, and chirping in the background as well. This sets the mood well, and before the vocals come in there's some quiet guitar, and then the blast of the trumpets. Cedric's voice kicks in after the 5 minute mark quite tenderly, while the ambience still resonates in the background. The entire duration is much more subdued and restrained than anything you've heard from the Mars Volta before, and it beautifully sets the stage for the 30-minute epic that is "Cassanda Gemini."

While it is only one song, it's set through 7 different tracks. The first 5 minutes begin with all guns blazing, Cedric's voice bouncing around the scales while Omar's guitar cuts through it all. There's some distorted spoken word here, with the instrumentation in the background accenting it well. Omar breaks into an absolutely ridiculous solo, and it's soon accompanied by the backing strings and horns. For all of the first 10 minutes, it's a seesaw battle between Omar's intense guitar work, Cedric's impassioned vocals, and the powerful horns. Things loosen up a bit with the ambient section coming in at about the 10 minute mark, but then return in pieces, with each member of the band seemingly doing their own thing. They really work the loud/soft dynamic a lot with this song, and it ends up amazingly. Things finally culminate with the horns raging, Omar absolutely going off on guitar and Cedric crying out " Heavens just a scab away .. / let them see it has begun, the others what I've become."

And 77 minutes later, the hurricane that is Frances The Mute has finally subsided, leaving the rest of the music world, and you, just as ravished and out of breath as anything. So you can go ahead and write this album off as pretentious bullshit, or overindulgent crap, or fuckass showoffery, but it's not going to lessen the impact this will have on music; you might as well spend your time putting water in Buc Nasty's mama's dish.

Roger Miret and The Disasters: 1984

Yaphet Kotto: The Killer Was In The Government Blankets