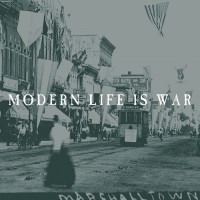 Growing up in Iowa, you don't have many bands to look up to. Sure, there have been great bands, but none that became successful. And then, of course, Slipknot exploded. It now seems that people think the only type of music that comes out of Iowa is the kind of stuff Slipknot plays. While I actually don't hate Slipknot ('cuz my parents are fuckin assholes, dude), it's frustrating that Iowa is dismissed as "that place Slipknot came from."

So it's by some strange miracle that Modern Life Is War came from the sleepy railroad town of Marshalltown, less than an hour north of Des Moines. Playing a brand of hardcore that's less about metal and much more about punk rock, Modern Life Is War have garnered a very respectable national following. They toured Europe with Converge, and they just finished a huge tour with Terror and Comeback Kid. Off the heels of all that, they have just released their first full-length for Deathwish: Witness.

Any hype that you may have heard about this album is completely justified. Witness is one of the best hardcore albums to come out in quite a while. Modern Life Is War somehow crafted music that can fit in with bands like Terror or Comeback Kid, but still doesn't sound anything like it. The remarkable thing about most of these songs is that they aren't built on standard fast beats, or half-time breakdowns. Songs like "I'm Not Ready" are more or less build-ups that just keep getting more and more intense, eventually catching you off-guard with their endings. This is a brilliant formula, and Modern Life Is War have perfected it.

Lyrically, it's almost impossible to top Witness. Vocalist Jeffrey Eaton writes in sweeping gusts of passion, anger, and confusion. Growing up in Des Moines was bad enough for me, so I can only imagine what kind of shit happens in Marshalltown. Eaton is a master at transporting you into his world and making you feel what he feels, especially in the ode to his hometown of the same name. These are songs that will implant themselves into your conscience, lyrically and musically. You will not forget about these songs, and the effect that they had on you when they first hit.

It sounds like a clichÃ©, but if every album could be like Witness, then maybe music wouldn't suck as bad is it does right now. Modern Life Is War are the breath of fresh air that we've needed for quite some time. Since every band can't emulate the stirring passion that these guys do, it's important to appreciate the fact that such an amazing band has escaped from their small town limitations, and are riding a wave of success. They won't sell as many records as Slipknot, but to me, they've already accomplished much more than Slipknot could ever hope to.

Funeral For A Friend: Hours