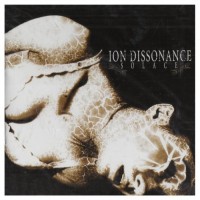 Your parents will hate Ion Dissonance.

In 2005, parents are no longer complaining about Elvis Presley and any other similar "devil music" of the `50s, or are they complaining about the questionable metal that was so prevalent the `80s, with bands like MÃ¶tley CrÃ¼e and Twisted Sister. Now, in 2005, bands like Ed Gein, the Dillinger Escape Plan, and Ion Dissonance present an entirely new level of cacophony for parents to detest.

Solace, the band's sophomore effort, has come courtesy of Abacus Records, and it's just as, if not more destructive than its predecessor, Breathing is Irrelevant.

Lightning quick chord progressions and time signature changes, vocals that cascade up and down the scales, and a terrific drummer that keeps pace with it all, Ion Dissonance are the complete package in the world of heavy music. Vocalist Gabriel McCaughry is about as versatile a singer as you'll be liable to find, ranging from the lowest of growls, to the highest pitch shrieking, and everything possible in between. Nobody around today can manipulate their vocal cords into the array of sounds that he is able to; it's truly impressive. "Signature" is Ion Dissonance at their passionate, frenzied best, with McCaughry seemingly using his entire range throughout the volatile duration, in which you're never quite sure what direction the song is going to take. And that's part of the band's draw: Complete and total unpredictability. "O.A.S.D" will flatten you in three minutes time with its outright power and unwavering intensity, but at the same time it exposes what could be considered a real weakness with the band:

Ion Dissonance possess a level of talent far above what a good number of their contemporaries are doing, but on record, the songs just keep picking up steam, and then just end, and you had no idea the song was coming to a close in the first place. Bands like Dillinger Escape Plan have mastered the art of chaos, but are also able to give that chaos clear direction, and Ion Dissonance often don't. That gripe aside, if you do want an album with unrelenting fury, this will surely be your ticket. Bands like this typically best translate into a live setting, but if "Nil :: Solaris," doesn't get people into a complete frenzy, I don't know what will. The guitars start, and stop, start, and stop, only still being able to pick right back up where they left so heavily off. The time signature changes will make your head spin, will McCaughry's thunderous vocals stand above it all.

This is surely to be one of the best heavy releases to be a heard this year, an album that will grab you by the throat, giving you a chance to breathe only if you're lucky. A little more direction in these songs, and this Canadian five-some will be a force nobody will want to chance reckoning with.

Swarm of the Lotus: The Sirens of Silence