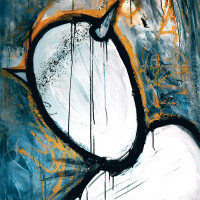 There's those few seminal bands, and not many come around each decade, that really change the way you look at music. It's different for everyone, depending on the type of music you really enjoy, and how each individual album by a band impacts you. One of those such bands for me hails from Boston, Massachusetts, and like them or not, there's absolutely no denying that they're one of the single most influential bands to ever step foot on stage. That band my friends, that band is Converge.

Metalcore wasn't a well known genre in 1998, but this foursome had already been at it for eight years at that point. Predating Harvest, Threadbare, 108, and other such bands that are often thought of as the originators of metalcore, Converge was making music far ahead of their time. And just when other bands gained some footing, and thought maybe they've caught up, the band dropped the landmark When Forever Comes Crashing.

There's a lot of debate as to whether this or Petitioning the Empty Sky was a better release, and when it comes down to it, neither is better. Both are perfect. That's right, perfect. WFCC is forty-one minutes of the most ear-splitting, punishing, and well crafted heavy releases of all time. It all starts with singer Jake Bannon. An absolute madman, he commands the perfect voice to rise above the jarring dissonance and intense start-and-stop riffing that made Converge such a household name. But it's not that they're loud, hell, anyone can be loud, it's their songwriting craft that makes them so special. The melodic intro to "The Lowest Common Denominator" lulls you into a false sense of security, but with each strum you can sense an impending burst of chaos, as the tone slowly darkens, until Bannon's maniacal shriek enters the fray, and the dissonant riffing slowly bludgeons you into submission. As I mentioned before though, Converge's songwriting has many facets, and without compromising their sound in the slightest, they're able to really work a variety of angles and make each song sound fresh and powerful at the very same time.

The uncompromising speed and power of "Conduit" makes itself known from the outset, with many quick, dramatic tempo shifts, and Bannon howling like a banshee above the frenetic guitar playing of the unflappable Kurt Ballou. During the "slower moments," the repeated riffing sounds like the wail of a siren, but this doesn't make any of the band more musically cautious, possibly even making them more volatile than before. The drumming has to be stunningly quick and spot-on to even comprehend, but it is, and it has to be, as the pace set in the bass driven "Letterbomb" and the reckless abandon of "The High Cost of Playing God" demands that kind of talent. Each member of this band has to be flawless for these songs to work, and I'll be damned, flawless is just what they are. "The High Cost" delivers and then some with spastic vocal delivery and breakneck musicianship. The band isn't all about speed or power for the sake of it though, as almost every song cuts in and out, weaving through tremendous time signature and tempo changes, Bannon fervently shrieking amidst all of this calamity. Most impossible to decipher, Bannon's lyrics, as his vocals, are several steps above any band playing a similar style. His words cut to the very core of emotion, and beneath all the swirling dissonance and noisy, layered textures, there really is a level of beauty.

There was nothing that I ever wanted more than for you to hold this deep within your heart / To lay beside me as my halo burns deep into a cinder, and to the wake me from my tired life / Give this ghost a home again, when you fall short and I fall short, this is where I pretend I'm as tall as the sky / Now there is no comfort in your apology, and no comfort in this shame / This is where I can duck for cover from the overwhelming, from the forever overhead / For the heart, for old times sake, I'll stay warm with this.

His eloquent wording makes his incredible screaming all the more heartfelt, without detracting a single thing from the ferocity of his delivery. Manic and disjointed, his every word rises and falls with the hellacious rhythms behind it. These songs aren't bits and pieces of greatness, but full and complete works that most bands could never even hope to aspire to.

Equal Vision did an amazing thing to remaster the album, as the newly improved production only lends itself to the weight and gravity of this release. The liner notes tell the band's story, and come with some full color pictures and brand new artwork, even better looking than before.

Until somebody steps up to the monumental task of dethronement, Converge is the be all end all of the metalcore scene. Make no mistake, most of the bands around today are just poor imitators. Converge is the true meaning of what happens when beauty meets a beast

Ill Repute: What Happens Next?