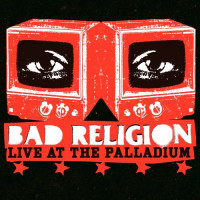 I don't care what anyone says, I love Bad Religion. They honestly have changed my life. Ever since I first heard "Infected" in 5th grade I have been hooked. The harmonies, guitar solos, and lyrics (when I was studying for my GRE test, I knew the definitions of five or six vocabulary words like sagacious and misanthropic simply because I had listened to Bad Religion and I worship Greg Graffin) have always made them stand out above any other modern day punk band in my mind. During their 20-plus-year career, Bad Religion have created a sound and style all their own, which has influenced almost any punk band that you listen to today. I have seen them live 7 times including November 21st, 2004, live at the Hollywood Palladium, the second night taped for their Bad Religion: Live at the Palladium DVD. I have to say that night at the Palladium was the worst time I had seen Bad Religion. The band played flawlessly, but there was a huge barricade between the crowd and the band, and a huge barricade down the middle of the huge venue for a camera on a crane, plus insanely tight security. That night the band and crowd gave it their all, but to me the show felt like what it was: staged for a DVD. Nevertheless, I was out on March 17th buying my copy of Live at the Palladium and seeing how the show I went to turned out on video.

The set list from the two nights that Bad Religion performed spans their entire catalogue, from early hits like "Along the Way" off of their 80-85 release up to "God's Love" from their most recent, The Empire Strikes First. Included is a very touching and beautiful live solo piano version of "Cease" performed by Graffin. All in all, there are 31 of Bad Religion's songs on here, so there is a little something for everyone over the 96 minutes of music. The 5.1 surround sound quality is great; you hear everything, from all the mind-blowing fills that drummer Brooks Wackerman does to the incredibly well-pulled off harmonies from all the members of the band (yes, Jay Bentley and Mr. Brett actually sing quite well). The band is full of energy as they run all over the stage, with Graffin pointing, Jay screaming like a madman, and Greg Hetson doing his trademark leap. In one option on the DVD you can watch the concert footage, as well as interviews with all of the band members spliced in between every two or three songs. For me, these interviews were the highlight of the DVD. The questions asked are rather generic (i.e. "When did the band start?," "Where did the logo come from?"), but the band members elaborate on all of the topics, and it's a real treat for a fan to hear about the band's first show, the division between the punks in Hollywood and the punks in the Valley and all of the personal anecdotes. You also get a real appreciation for all the personalities within the band. If you so choose, you can watch these interviews separate from the concert and vice versa, which is a nice option.

The DVD also includes six music videos and two TV appearances of the band from 1980 and 1982. The performances from these television appearances really make you appreciate how far the band has come. In the `80, clip the band looks like what it was: a bunch of teenage punks pounding through their 3-song set with Graffin doing much more screaming than singing and Jay Bentley standing incredibly stoic (compared to his now lively stage performance). They remind me of any number of bands that I have seen opening at Gilman, but you can tell that there is just a little bit more to them. The `82 clip offers a version of "We're Only Gonna Die" and the band coming a lot more into their own, and it is fun to compare `82 to the live 2004 version of the song. The other extras include some behind the scenes stuff and a photo gallery. While these extras are very cool, and the sound quality and set list are great, I have some problems with the camera work and editing on the DVD.

While the show was shot with 5 cameras, there is a constant cutting back and forth between all of the cameras that really gives a choppy feeling to the show. One second you're behind the drum riser, the next, looking at Brian Baker's hand. Also, it is easy to tell when the song contains footage from both nights. For example, during several songs Mr. Brett has his glasses on, and then in the next shot, they are off. To me, this editing somehow ruins the sincerity of the live show. I don't want to see a collage of Bad Religion performing "Modern Man;" I want to see it in one take, with all of the mistakes and grit that go into a live performance. Also, much of the stage banter was cut out too, with the exception of Graffin introducing songs. I know for a fact that when I went, Bentley mocked some kid at length (including a re-enactment) who tried to stage dive with a backpack on and misjudged the jump and as a result, hit the stage when he landed and rolled off, yet I couldn't find it on the DVD. To some of you, this may not seem like a big deal, but to me, missing little episodes like that take some of the personality out of the DVD footage. To me, it makes the DVD less like capturing BR in a concert, but rather a polished music DVD.

I think Live at the Palladium is worth owning if you're a Bad Religion fan, have never been able to seen the band play live, or love punk music. The picture is clear, the sound is perfect, but like I have said, I have some problems with the way the DVD was edited (I think some of the "Show Must Go Off!" Series are a little better done in that category). With that slight flaw though, for me I think that the DVD does the Bad Religion justice. Live at the Palladium defines Bad Religion's legacy as not merely being another punk rock band but rather, a band that has been able to change the face of music and people's view of the world in ways which almost no other bands have been able to achieve.

Cheap Sex: Headed for a Breakdown