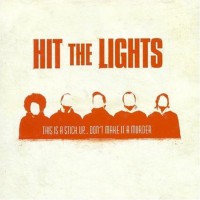 If you were into pop-punk in 1998, this album may make you realize you didn't fully "grow out" of that genre of music. If you don't like pop-punk in any way, shape, or form, I wouldn't bother with this album. Hit the Lights' debut full-length This Is a Stick Up - Don't Make It a Murder is pop-punk in its purest and maybe even finest form. I can't stress this enough: There are no catches here, just catchy music.

It's hard to put a finger on why this album is so good because there's nothing groundbreaking here. Hit the Lights doesn't tread any new water or even travel their own unique path. They follow right in the footsteps of New Found Glory and the Ataris, but at the same time those bands haven't put out a really good album in recent history. I'm talking about those bands when you couldn't stop listening to their albums. That is the exact same thing Hit the Lights is doing on this album.

The most addictive of those tunes has to be "Bodybag." As I write this, "Bodybag" has been played almost double the amount of times as any of the others. Not to say that this song is so much better than the rest, just that it is such a standout track. The opening track, "The Call Out (You Are the Dishes)" is a perfect way to introduce listeners to what to expect from the rest of the album. The album takes a slightly slower pace on "One Hundred Times," but still feels completely at home with the rest of the songs and is even a welcomed change. The final track, "Make a Run for It" states "We got this down to a science, baby." Something listeners are going to have trouble denying as they join in.

This album isn't going to blow anyone's mind away. Plain and simple, this album will give you something to sing along to. You will find that Hit the Lights does everything right as far as pop-punk goes and if that is a genre that you enjoy, then I can't recommend this album enough. It also happens to be a perfect album for warm weather and makes me question whether or not Triple Crown Records somehow planned that out. Make sure you go to the nearest store, buy this album, and play it with the windows down.