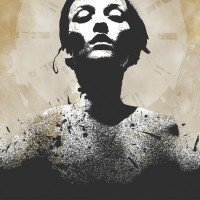 At this point Converge has become a hardcore institution; over the course of dozens of releases and countless live shows, the band has emerged as the center of the Northeastern (and perhaps national) hardcore/metal scene. One of the first shows I ever attended featured Converge headlining, playing to about 50 kids in a Norfolk, Virginia basement, many of whom had traveled from as far away as Ohio to see the band. The experience was one that, in many ways, defined hardcore for me; the singer had been sick for the entire tour, and he invited the crowd to help out with vocals as possible, and everyone readily complied. The communal spirit of that show really appealed to me, and it's quite possible that had I not attended this show I wouldn't be writing this right now.

So, here is Converge's third full-length studio album (fourth if you count the LP version of their 7" Petitioning the Empty Sky, sixth if you count split full-lengths with Agorophobic Nosebleed and Hellchild), and thankfully things haven't changed all that much. The discriminating metalhead is still treated to heavy, technical riffing, epic song structures, and screams that sound as if they're being beamed straight from the innermost circles of the inferno. However, upon close inspection we find that certain aspects of the album have been updated in some respects.

First of all, the production on Jane Doe shows a considerable amount of restraint compared to Converge's past two records on Equal Vision. I clearly remember putting When Forever Comes Crashing into my '84 Chrystler LeBaron's CD player just after I finished installing a new set of 10-inch speakers. As tracks like the blistering "Conduit" raged through the system, I repeatedly checked behind me to see if I had lost the entire rear end of my car. Whereas on that record the bass was mixed so loud that on most stereos it came out as a distorted mess (which was actually a perfect compliment to the vocals), the mix on Jane Doe, while still very much in the red, won't permanently damage any of your stereo equipment.

With the emphasis taken away from producing a near-constant sonic pummeling, the band is free to experiment with a few small variations in style. While Converge records have almost always featured one or two quieter, spacey-sounding tracks, on Jane Doe the band breaks from the hardcore assault with "Hell To Pay," which features a slow, funky bass line that is even more grooving than most vintage Sabbath tracks. Similarly, the haunting backing vocals of "The Broken Vow" and the Bonhamesque drum rolls in "Phoenix In Flames" also break new ground, albeit subtly, for the band.

Despite all of these varied and interesting features, the clear climax of Jane Doe is the epic, 12-minute long title track that closes the album. Converge's songwriting is perfectly suited to these types of epic compositions (after all, what other rock band's most popular song is seven minutes long and composed of more different parts than most bands' entire albums?), and this track is no exception. The song flails about like a newly decapitated chicken, and miraculously every single section seems more punishing, technical, and downright disturbed than the last.

While Jane Doe isn't really a groundbreaking album for the world or for that matter Converge, this will slide seamlessly into your collection of all-time greatest metallic hardcore records. Appreciate this now, because one day Converge will break up, and it will be the end of an era. Here's hoping that I'm long gone by then.

Sprung Monkey: Get A Taste

Carry On: A Life Less Plagued