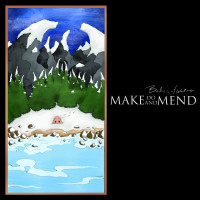 If you are reading this, then that means you have downloaded 'Bodies of Water.' We would just like to thank you. These six songs mean more to us than anything we've ever recorded, and we sincerely hope it shows. We decided to release it the way we did because we wanted to have complete control over what we created, we wanted you to be able to hear these songs without having to spend your money, or feel guilty about downloading it illegally. In this fashion, BOW is as direct an expression we could hope to make, legitimately from us to you. Thank you for taking an interest in this record"


Those words were taken directly from Make Do and Mend's "Thanks" section of their free of charge, downloadable EP, Bodies of Water. It's the same modesty and sincerity that masks the very few flaws within these six well-crafted and perfectly sequenced tracks. Following up their 2007 EP, We're All Just Living, the band supplies all the obvious Hot Water Music influences you could muster (Caution seems to have been on heavy rotation), yet pieces it together with their own hookish sensibility.

The opening track, "Shambles" acts as a prelude, foreshadowing the reverb-drenched chorus melody to the following "Wintertime Wasteland." The vocals over the soft palm muting are deceivingly clean as a simple, distorted drum pattern emerges from behind the music and carries into said "following track." The gruff increases as the dynamics explode into huge harmonious chorus. The adjacent "Father" and "Our Own Ebb and Flow" have arguably the two most memorable yet simple melodies, while "No Words" is less conventional with complex structures and guest vocal duties.

The most impressive feat accomplished in Bodies of Water as a whole is the atmosphere that's created; the lonely and mountainous isolation portrayed in the artwork is not only eye-catching, but a snowy visual summarizes the themes throughout the lyrical content. Against the haunting, numbingly below-zero temperature of the instruments, the vocalist, without trepidation, wears his heart on his parka. Whether he's picking apart scabs from his past with "Father" ("How am I the product of this man?") or his eloquent pessimism with "Shambles" ("I don't believe the clouds are hiding much than a reason to downpour"), the lyrics are thoughtful and definitely genuine.

Though tangible albums are more my thing, the PDF file comes complete with all the lyrics and great, wintry artwork -- the whole "free" thing ain't too shabby either either. Personally, I would have been more than happy to have paid for Bodies of Water. In fact, I'd be downright elated -- it would have been worth every penny.