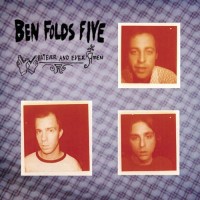 Ever since their debut in 1995, Ben Folds' popularity has been on the rise. While I still enjoy his solo work, I still find myself listening to Ben Folds Five and the three albums they put out in an eight-year span. Folds himself describes his music as "punk rock for sissies," but the subject material on this album is as profound as ever. From songs about divorce, old relationships and getting over a tumultuous past, Whatever and Ever Amen is a must-have for fans of piano rock, witty lyrics and overall catchy songs.

The album kicks off with the upbeat, piano-driven "One Angry Dwarf and 200 Solemn Faces," an anthem of revenge against the kids who bullied Folds while he was young. In the chorus, he brags, "If you really want to see me, check the papers and the TV, guess who's telling who what to do?", adding a touch of humor to the album. Overall, it's a good song that regularly made radio playlists when the album came out in 1997. The second track, "Fair" tells the tale of a bickering couple who make amends shortly before the husband is accidentally thrown into traffic by his wife. Folds then launches into what seems to be his own experience, dealing with an ex followed by Sledge and Jessee's chorus harmonies, which really shine here.

This album is fantastic, and I consider it to be their best work. WAEA offers songs like "Brick," which deals with moral dilemmas and various feelings a couple has when facing unplanned pregnancy. I think this song is particularly worth noting since it caused a small bit of controversy when it hit the airwaves. The lyrics, "6 AM, day after Christmas, I throw some clothes on in the dark" really convey a feeling of loneliness and depression about what's about to ensue. Couple that with "The smell of cold, car seat is freezing, the world is sleeping, I am numb" and you have quite a realistic depiction of how holidays never last and how realities must be faced at one point or another.

The story is somber and still remains one of their most popular songs. They've couldn't have put such a sensitive matter any better and it's no real mystery why this is considered their "swan song." This one makes the rounds at Ben Folds shows regularly and has a pretty memorable piano melody fans have come to know and love.

I can't say enough great things about this debut followup; it's actually very impressive to this day. I guess if I had to choose two of my favorites, I'd go with "Selfless, Cold and Composed" and "Steven's Last Night in Town." The latter is Folds' foray into big-band with a song about indecisive Grammy-award winning producer Steven Short and the past held by the two. The lyrics, "Won us over with stories about Linda McCartney, lost points with the ladies for saying he couldn't love a woman with cellulite" are pretty great, and capture the man's personality quite well. The drums here are great and so are the horns heard in the chorus. The song is definitely one of the best this CD has to offer.

One track worth mentioning is "Cigarette," a song clocking in at 1:38 which serves almost as an intermission on this album. While the subject material has been debated, it basically tells the story of a sleepless man named Fred Jones living in fear for his wife, and her constant need to light up while on medication. The piano work here is amazing and quite depressing actually, which serves very well considering everything else mentioned here. If any track could bring someone to tears, this is it (though "Brick" is a worthy contender too).

Last but not least is probably my favorite track on the album, "Selfless, Cold and Composed," a song on relationships in general and how easily they can fall apart. It starts off quiet with a jazzy drum beat before launching into an epic story of remorse and regret. At one point in the song Folds recalls a futile attempt at reconciliation with the line, "but you just smile like a bank teller blankly telling me: 'have a nice life'." The orchestration is also a nice touch to this particular song and I highly recommend giving this one a listen if nothing else.

Tracks such as "Missing the War," "Evaporated," "Song for the Dumped," "Kate" (on Folds' then-wife Kate Rosen) and "Smoke" are all great too, but I think I've said more than enough about a lot of the tracks found here.

I suggest picking up the remastered version of this one simply for its seven bonus tracks, which include a fantastic lounge cover of "She Don't Use Jelly" by the Flaming Lips. "Air" is another amazing track from the 1998 Godzilla soundtrack detailing "drowning" from two different perspectives, a great song overall.

I gotta give this one a five simply because it has so much to offer when it comes to style and emotion. From songs filled with rage, remorse, spite and the blatant curiosities of love and relationships, this album opened my eyes to the brilliance of Ben Folds. Every song has something different to say and I highly recommend this to anyone into piano rock, heartfelt lyrics and, of course, Ben Folds' solo work. After hearing "Alice Childress" years and years ago, I thought nothing of the trio, but I quickly changed my mind after hearing this one.

The Number Twelve Looks Like You: Worse Than Alone