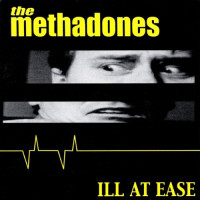 If you don't know how the Methadones sound by now, you must either be new to the pop-punk scene or extremely forgetful, because it's hard to forget a band this fun. Ever since the band's first full-length from 2001, Ill at Ease, the Methadones have consistently provided albums that sects of their fans considered to be their favorite or "the best." With killer albums such as This Won't Hurtâ¦ and Not Economically Viable, it's hard to single out which is the best, speaking objectively, when the truth of the matter is, they're all great.

I, however, have made up my mind. Ill at Ease is my favorite album by this band, and with good reason: This album has a unique sound to it not found on any other Methadones record, a sound that is addictive and propels this album into greatness.

In fact, this unique sound might not be found on any other punk album. At least, not that I know of.

But are all of the elements of a Methadones album present? Of course: three and four chords that possess the catchiness of H1N1; unrelenting power-pop that never gets old despite sounding similar to every other band of the genre; introspective and personal lyrics that every pop-punk fan has come to expect from vocalist Dan Vapid.

But the sound here is different. This isn't just power-pop. It's darker than that. It's power-pop plus something else. Clocking in at just under 33 minutes, these 10 songs leave nothing to be desired except for more of it. I wish they would release just one more album that sounds like this, where Dan Vapid somehow manages to not only harmonize his voice in a deadpan tone, but also the guitar riffs and chords blast the listener in a way that is both deadpan and catchy. The result is a concoction of addictive power-pop that seems to bleed through the speakers effortlessly, as if they weren't even trying to make music this good.

Which Methadones album is greater than the others? Who cares. When it comes to the Methadones, you can't go wrong. Every release of theirs is solid. Start here, and work your way through. You won't be disappointed by one of the best pop-punk bands going today.

Set Your Goals: This Will Be the Death of Us

The Mr. T Experience: ...And the Women Who Love Them (Special Addition)