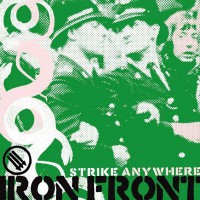 In a year where bands like the Bouncing Souls and Paint It Black avoided full-lengths in favor of short seven-inch bursts, Strike Anywhere rallied ahead with their fourth full-length, Bridge Nine debut, and possibly best album ever with Iron Front. Maybe it's fitting, given that the Iron Front, the circle with three declining lines that decries communism, monarchism, homophobia, anti-Semitism and pretty much any other jerk belief system ever, has always been Strike Anywhere's symbol. Iron Front describes the band's aesthetic more than even an eponymous title ever could.

Iron Front revitalizes the band's melodic hardcore sound. Things seemed a little dark there for a while -- Exit English was merely solid; Dead FM would've been the best EP of 2006 if the band had just stopped recording -- but this new release finds Strike Anywhere combining their trademark socio-political insight with their most infectious hooks yet. Catchy yet informative (hereafter known as the Avail Principle), the songs take on globalism, child soldiers, racism and environmental policy, among other issues.

The elements seem so simple -- keep it short and fast, rock the gang vox, and maybe try to change the world while you're at it. Yet no one else seems to be knocking out songs like Iron Front's 13 tracks. Those who purchased the preview EP will already know and love "Failed State" and "Hand of Glory," but they'll be shocked to see those aren't even the strongest cuts on the album. Album opener "Invisible Colony" blasts through civil discourse in the U.S. in 78 seconds, giving way to the uber-catchy "I'm Your Opposite Number." Frontman Thomas Barnett is fed up with trying to get along, taking the violent right to task, singing, "Lower the flags / Raise up the earth / Freedom 'til death / Death until birth / We're still fighting each other / I'm your opposite number." He even throws in a "Fuck you" for good measure. And when someone as literate as Barnett tells you to fuck off, you know he means it.

Outside of picking "Invisible Colony" as the opener, I imagine little thought was needed to sequence Iron Front, because the songs are all so got-damned awesome. As excited as I am to sing along with deep cuts like "Omega Footprint" (love the chorus) or "Summerpunks" (best "whoa"s of 2009, hereafter known as Whoa-Nine?), I can't bring myself to skip a single track of this 30-minute masterpiece. I mean, I wouldn't want to miss "The Crossing" (another catchy chorus ân' whoa concoction, natch). But then again, I always want to hear "First Will and Testament," a love letter to lost friends, coursing through my ears and blood. Barnett takes inspiration from the deceased, vowing to "Wait for the day / Work of the day." He's going to live and then "shine in this song even when my body's gone."

"Postcards from Home" closes out the record brilliantly with its tale of child soldiers who can't break out of a cycle of violence ("You can't walk away / This land will follow you / You can't walk away / 'Cause this is home"), which is a shame. See, as wonderful as the song is, Iron Front demands to be on repeat. The songs need to be blurred together and boiled down and bonded with your DNA, just like with Chorus of One and Change Is a Sound. I know it's October and all, but this is the punk album to beat for 2009.

Siouxsie and The Banshees: Juju