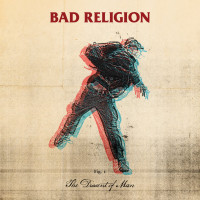 With the exception of 33-year-old drummer Brooks Wackerman, the '80s punk legends collectively known as Bad Religion started when Ronald Reagan was just elected. I mean...damn. After experiencing a late-career creative and popular resurgence with 2002's The Process of Belief, 2004's The Empire Strikes First and the return of original songwriter/founding member Brett Gurewitz, the band turned out a disappointingly forced return to their late '80s/early '90s heyday with 2007's New Maps of Hell. It was uncertain where the band was going to go musically after three albums playing to their typical strengths at being...well, imitating the late '80s/early '90s Bad Religion.

With that said, The Dissent of Man is thankfully NOT a sequel to New Maps of Hell. A far more natural, organic followup to the experimentation and improved pop sensibilities of TPoB and TESF, the band channels a bit of Springsteen, Tom Petty, and '90s alt-rock alongside their standard trademarked brand of melodic double-time punk. In many ways it's a spiritual brother to the experimentation of 1993's Recipe for Hate, with even a bit of their Atlantic Records-era (the one BR fans don't speak about) pop-rock songwriting ticks done right. It will unquestionably piss off fans that wanted another No Control or Against the Grain and requires more than one listen to absorb all of the details in the recording before passing judgment.

Greg Graffin turns in what might be his best vocal performance ever on this record, along with penning many of the album's faster songs--the overall majority of stellar tracks like "The Day the Earth Stalled," "Avalon," "Meeting of the Minds," "The Resist Stance" and "Ad Hominem." The influence from his solo work is apparent in songs like "The Pride and Pallor" with its folksy melodies, with only "Someone to Believe" being somewhat bland (and sounding suspiciously like New America cut "Hopeless Housewife"). His iconic vocals take surprisingly accomplished turns in "The Day the Earth Stalled" and "The Resist Stance," boiling over with relentless energy belying his near-50 years of age. His songs unquestionably rule the record on the quality front in comparison to writing partner/co-founder Brett Gurewitz. Aside from the spectacular "Only Rain"--legitimately one of the best songs the band has produced since their heyday--and the great but unintentionally funny "Wrong Way Kids" (according to Graffin it's "Keeeeeds"), most of Brett's songs take a more mid-tempo alt-rock vibe with mixed results. "Cyanide" turns out to be a great country-tinged rock song (with leads provided by Mike Campbell of Tom Petty & the Heartbreakers fame) by referencing--of all things--a Wallflowers riff/song structure to great effect, whereas "I Won't Say Anything" is the most unexpectedly subdued BR album closer yet, but also one of the most delicate songs the band has written.

The problem is the album's sequencing; most of Gurewitz's tracks are packed onto the back of the album, front-loading many of the faster, stronger tracks and leaving it feeling a bit uneven once you hit the last three or four songs. Brett-penned "Where the Fun Is"...is most definitely not, sitting with "Turn Your Back on Me" and "Won't Somebody" (also Brett songs) as the three weakest tracks on the album. While they're not bad songs, they tend to highlight BR's uncanny abilities to self-influence and simultaneously throw B-side material on their records. Dude, didn't you re-write "21st Century Digital Boy" like three times already? But there's that EXACT stuttered chord progression again on "Where the Fun Is." The irony that the band needed Brett to get back to making quality music again in the first place isn't lost on me.

The lyrics are a bit of a mixed bag, as well. While BR's lyrical forte mainly depends on the listener's political/social proclivities, it doesn't take much to figure out that the lyrics on The Dissent of Man are quite a bit less confrontational and a lot more direct/simplistic than before, which might take some fans off guard. Bad Religion just need to learn one important thing: QUALITY CONTROL. They could stand to trim the fat from the meat of their dishes--you don't need 15-17 good songs when you have 10-12 legitimately GREAT songs, track lengths be damned.

Thankfully, despite any missteps on the record, there's likely a hook, melody or guitar riff that pulls you right back in, wanting more. What's particular is how BR have finally started to take advantage of the fact that they have three very accomplished guitarists in the fold. The guitar work is masterful, full of intertwining riffs straight from both the punk and rock playbooks, with lead guitarist Brian Baker turning in his finest performance in the band with ripping lead work on almost every track. Brooks Wackerman provides a tastefully restrained performance on much of the album, with the skill of a veteran and the vigor of his youth, with Jay Bentley dutifully keeping the band's jackhammer rhythms tight alongside Greg Hetson's buzzsaw of guitar. Unlike the bland, direction-less musical path they went on their late '90s material, BR has gained a confidence--almost a swagger, actually--in pulling off a mid-tempo sound by adding deeper melodic flourishes to their sound as they've matured into elder statesmen of the punk rock alumni. The band has truly never sounded better.

With The Dissent of Man, Bad Religion are clearly leaving their speedy past and comfort levels on the backburner and forging ahead with a mature and modern punk rock outlook, fusing many more styles of rock successfully into their bag of tricks. The band could have made a quickie followup to New Maps of Hell but went in a completely different, riskier direction that paid off on a bigger scale creatively. To stay in the past is to allow yourself to be ruled by it; Bad Religion are looking to their bright future and the possibility it brings.