It's been over a year since we last last spoke with Blood Brothers co-screamer Jordan Blilie, but he was kind enough today to take some time off to conduct an interview with us and talk of topics ranging from the writing process for Crimes to Clear Channel and hibernation activities this coming winter, amongst other exciting endeavors and situations alike. 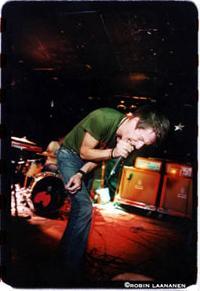 My name is Jordan and I am one of two singers.

How's the current tour with Against Me and True North been?

Fantastic. We're very happy to be on tour with both bands we're out with right now. We have just the utmost respect for both True North and Against Me, and it's the first time we've been able to spend an extended period of time with them so we're happy about that.

What was the writing process for Crimes like? Lyrically it seemed to take a more "obvious" approach than usual, with the themes well-expressed but maybe a bit easier to decipher than past albums. Was this more or less a conscious effort?

Well, one thing that we decided on before writing is that we didn't want to repeat some mistakes we felt we made with writing Burn. Mainly we did not play any of the songs live before we went into the studio to record them with our last record, so you can imagine spending five/six months writing a record spent in a practice space, not playing them in another setting. We didn't anticipate how they would come across. Afterwards we found that all the songs…they required a certain level of concentration that cut into the fun we were having playing them. So first and foremost we just wanted to get back to songs that were enjoyable [for us]. You know…we're gonna have to play them nine months straight. Writing with the last record, we sort of overintellectualized things. We tended to get quite bogged down, with where parts [end up taking] us a week to write one song. Once we took out a lot of the technical elements we were writing with the last record, it just opened us all up to more possibilities and the writing flowed a lot easier.

What made you settle on V2 Records?

There wasn't really a settling on our part; we didn't have too many choices. We were presented with one as a viable option and that's what we went with. We were in a situation where right after Burn came out our record label pretty much bought it out and were kinda left hung out to dry. We spent…a year, almost a year and a half uncertain about what was gonna happen with our future. We really had no idea what was gonna happen. We were contracutally bound to a label…we wanted to keep the momenutum we had going before writing, so we [just] went in and recorded. While we were recording, Artistdirect put together their split joint venture with V2 and they were going over things for us. It [was] that or look for someone else and we had gotten to a point where we were sick of waiting around for people to get their shit together. [And] here we are.

Do you think maybe [the band'll be moving on] after the contract's up…?

Tours: A Static Lullaby headed out on tour