Contributed by hubitcherkokov, Posted by Chris Moran Reignition 16 years ago

Death By Stereo have posted a live version of "The Plague" from their upcoming live album, Death Alive, due March 13 via Reignition Recordings. The show was recorded at The Chain Reaction in Anaheim, California during the Into The Valley of Death tour. The record was previously released and given away for free by Law of Inertia magazine.

The band's last studio release was 2005's Death for Life. 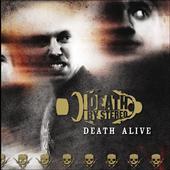