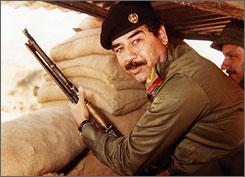 by Chris Moran In Memoriam 15 years ago

Various news sources are reporting that former Iraqi dictator Saddam Hussein was executed this evening. Though considered by many to be a justified end that questions the means, the loss of Hussein may not be mourned to the extent of those who chose not to use political power to attempt genocide and terror against any who opposed, but make us question the countless freedoms we have sacrificed in the name of the "greater cause".

Will the nationalism sparked by this event combined with the coming New Year holiday spark more celebration than the Red Sox World Series Championship? One can only hope we don't forget about that other guy, you know, the one who actually admitted ownership of the events on 9/11?

Have at it kids, this is probably the only "In Memoriam" where tasteless comments may actually be appropriate.