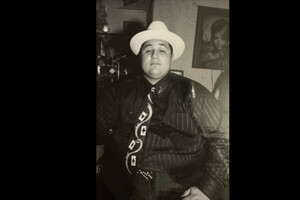 Sadly, Rob Vitale of Black Train Jack and Nine Lives passed away on Sunday. The cause of death was complications from COVID-19. Black Train Jack was formed in the early '90s with Token Entry's Ernie Parada. After that band ended, Vitale formed Nine Lives. We send our condolences to Vitale's family, friends, and fans.

Read more
In Memoriam 5 weeks ago
0 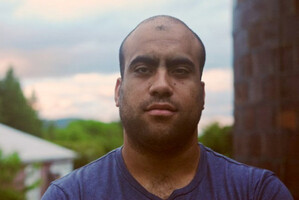 Matt Miller, founding member of Titus Andronicus, has passed away

>Matt “Money” Miller, founding keyboardist of Titus Andronicus, has passed away. He was 34. No cause of death has been released. Titus Andronicus frontman and Matt Miller’s cousin Patrick Stickles released a statement on the band’s Twitter account that reads,

“It is with a heavy heart that I announce to you the sudden and untimely death of Matt "Money" Miller, founding keyboardist of Titus Andronicus, cover model of "A Productive Cough," lead vocalist of "Home Alone (On Halloween)," my beloved cousin and the dearest friend I ever had

You may recognize him as the bartender from the "STACKS" sitcom -- he was also the hypeman on "Real Talk" and a featured backup singer on many, many Titus Andronicus tracks

It's hard to know what to say, but I am trying to put gratitude first, as the 34 years that we spent together will forever be one of my life's greatest blessings

"Until the day we meet again / in my heart is where I'll keep you, friend"

Matt Miller contributed to The Monitor in 2010, The Most Lamentable Tragedy in 2015 and Home Alone on Halloween EP in 2018. We send our condolences to Matt Miller’s family and friends.

Read more
In Memoriam 6 weeks ago
0 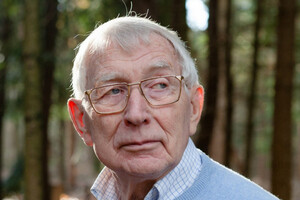 Lou Ottens, Inventor Of The Cassette Tape, Has Died

While working for Dutch-based Philips, Ottens wanted to create a smaller, cheaper version of the clunky reel-to-reel music format. In 1963, the "compact cassette" was released to the world. Interestingly, in later years, Ottens himself stated that tape was "prone to noise" and distortion and believed that compact discs were superior. We send our condolences to Ottens' family. A longer retrospective of Ottens' life can be found at NPR.

Read more
In Memoriam 6 weeks ago
0 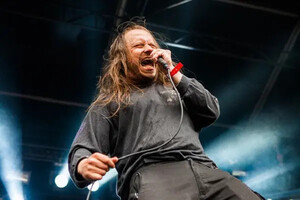 Lars-Goran Petrov of Entombed has passed away

Lars-Göran “L-G” Petrov, former frontman for Swedish death metal band Entombed and frontman for Entombed A.D., has passed away. He passed on Sunday March 7 at age 49 after a long battle with bile duct cancer. L-G Petrov’s bandmates in Entombed A.D. released a statement about his passing on their Facebook page which reads in part,

“Our brother, leader, vocalist, our Chief Rebel Angel went on another ride last night. It’s with the deepest sadness that we have to announce that Lars-Göran Petrov has left us. He was (is!!!) an incredible friend, and a person that has touched so many people. He has changed so many lives with his voice, his music, his character and his unique personality. LG’s smile is something that we will carry forever in our hearts. When asked in an interview what he would like to have written on his grave and what about his legacy, he said: "I will never die, it will never die". And you didn’t. You will live forever in our hearts.”

LG Petrov was the vocalist for Nihilist from 1988 to 1989 when the band reformed as Entombed. He sang on all of Entombed’s albums except for Clandestine in 1991. Entombed A.D. was formed by Entombed members in 2014 after a legal battle over the band name and released three albums, the last of which was Bowels of Earth in 2019. He also released three albums with Firespawn, the last of which was Abominate in 2019, and also released albums with Morbid, Comecon, and Allegiance over the course of his career. We send our condolences to L-G Petrov’s family and friends.

Read more
In Memoriam 7 weeks ago
0 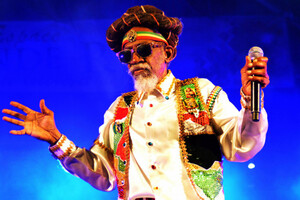 Bunny Wailer has passed away

Sadly, Bunny Wailer of The Wailers, born Neville O'Riley Livingston, has passed away. He was 73 and had been suffering from the affects of a stroke that he suffered last year. Wailer was the last surviving member of what is generally considered the original Wailers, which also included Bob Marley and Peter Tosh. In addition to recording dozens of albums, Wailer won a Grammy and also received the Jamaican Order of Merit. We send our condolences to Wailer's family, friends, and relatives.

Read more
In Memoriam 9 weeks ago
0 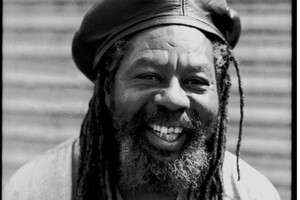 U-Roy has passed away

Sadly, iconic Jamaican toaster U-Roy, born Ewart Beckford in Jones Town, Jamaica, has passed away. He was 78 and passed away after surgery at the University Hospital of the West Indies in Kingston, Jamaica.

U-Roy was a pioneering toaster, first spotted by John Holt in 1970. His distinctive chatting style would go on to influence thousands of Jamaican musicians, and was an early step in the creation of dancehall music. In the late '70s, he would form his own soundsystem and help the early careers of Josey Wales, Charlie Chaplin and Ranking Joe.

U-Roy was awarded the Order of Distinction by the Jamaican government in 2007 for his contribution to music. We send out condolences to U-Roy's family, friends, and fans. 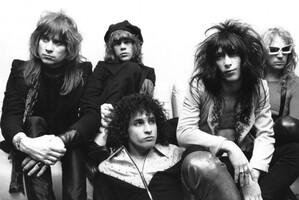 Sylvain Sylvain has passed away

Sadly, on January 13, Sylvain Sylvain of The New York Dolls passed away. He had been battling cancer for about two and a half years. David Johansen, the last living original New York Doll, released a short statement: "My best friend for so many years, I can still remember the first time I saw him bop into the rehearsal space/bicycle shop with his carpetbag and guitar straight from the plane after having been deported from Amsterdam, I instantly loved him. I’m gonna miss you old pal. I’ll keep the home fires burning. au revoir Syl mon vieux copain. February 14, 1951 /January 13, 2021".

You can see a statement by Sylvains family and friends below. Punknews sends our condolences to all pf those affected.

Read more
In Memoriam 15 weeks ago
0 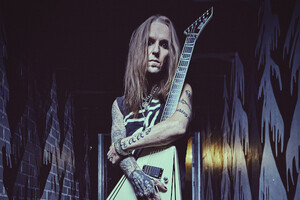 Alexi Laiho of Children of Bodom has passed away

Alexi Laiho, lead vocalist, guitarist, and founding member of Finnish metal band Children of Bodom has passed away at age 41. According to a press release Alexi Laiho passed away last week at his home in Helsinki, Finland and while no cause of death has been released, he “had suffered from long-term health issues during his last years”. A statement released by his Children of Bodom band members reads in part,

“More than 25 years of friendship. We lost a brother. The world lost a phenomenal song writer and one of the greatest guitarists of all time. Memories and Alexi’s music will live forever. Our thoughts are with Alexi’s family during this difficult time.”

Children of Bodom formed in 1997 and released ten studio albums, the last of which was Hexed released in 2019. Alexi Laiho formed Bodom After Midnight along with Daniel Freyberg, Mitja Toivonen, and Waltteri Väyrynen in 2020 and had finished recording three songs as well as a music video that will be released posthumously. Bodom After Midnight also released a statement that reads in part, “We are absolutely devastated and heartbroken for the sudden loss of our dear friend and band member.” We send our condolences to Alexi Laiho’s family and friends.

Read more
In Memoriam 19 weeks ago
0 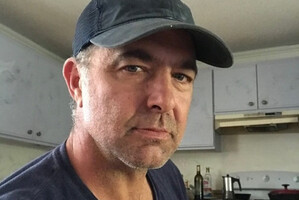 Chris Neumann of 2.5 Children Inc. has passed away

Sadly, Chris Neumann of 2.5 Children Inc. passed away, late last week. 2.5 Children Inc. was a Philadelphia-area punk band in the '90s. After that band broke up, Neumann recorded with Plow United as Texas Criffer. He also released a solo record titled American Songs Of Hope & Distress in 2003 on Fistolo records. More recently, Neumann had been working as a mason in Texas. We send our condolences to Neumann's family, friends, and fans.

Read more
In Memoriam 23 weeks ago
0 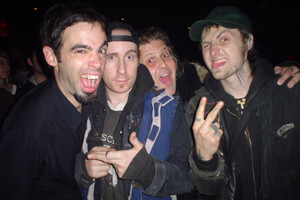 We send our condolences to Baillie's family, friends, and fans. You can read Leftover Crack's statement below. 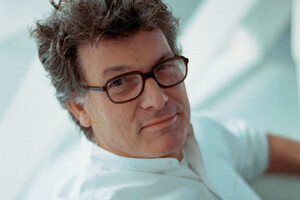 Bob Biggs founder of Slash Records has passed away

Bob Biggs, the founder of Los Angeles independent label Slash Records and visual artist has passed away at age 74. He passed on October 17 due to complications from Lewy body dementia. Bob Biggs worked at Californian punk magazine Slash and started the Slash Records label in 1978. Slash Records put out music by The Germs, The Blasters, X, Los Lobos, Fear, Faith No More, Violent Femmes, and L7 among many others over the course of the label’s active years. Bob Biggs also created the burning “x” that serves as the cover for X’s 1980 debut album Los Angeles. He designed the cover of Faith No More’s 1987 album Introduce Yourself and co-directed the band’s “We Care a Lot” video and his artwork was used as the cover of 2014’s To Be Kind by Swans. We send our condolences to Bob Biggs’ family and friends.

Read more
In Memoriam 28 weeks ago
0 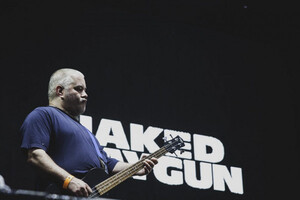 Pierre Kezdy of Naked Raygun and Pegboy has passed away

Sadly, today news broke that Pierre Kezdy of Naked Raygun and Pegboy passed away. The cause of death was cancer. Kezdy was 58. We send our condolences to Kezdy's family and friends.

Read more
In Memoriam 28 weeks ago
0 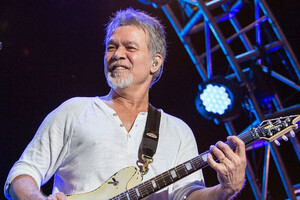 Eddie Van Halen has passed away

Eddie Van Halen guitarist and co-founder of hard rock band Van Halen passed away Tuesday, October 6 at the age of 65 after a long battle with cancer. A statement from his son Wolfgang Van Halen reads,

“I can’t believe I’m having to write this, but my father, Edward Lodewijk Van Halen, has lost his long and arduous battle with cancer this morning.

He was the best father I could ever ask for. Every moment I’ve shared with him on and off stage was a gift.

My heart is broken and I don’t think I’ll ever fully recover from this loss.

Eddie Van Halen co-founded Van Halen with his brother Alex and played on all of the band’s studio albums. He also worked with a variety of artists including KISS, Michael Jackson, and Black Sabbath. Van Halen released their twelfth studio album A Different Kind of Truth in 2012. We send our condolences to Eddie Van Halen’s family and friends.

Read more
In Memoriam 32 weeks ago
0 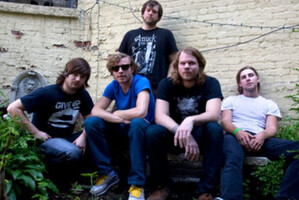 Wade Allison of Iron Age has passed away

Wade Allison, guitarist of Iron Age, has passed away. A cause of death has not been revealed. Allison also played in Mammoth Grinder and Eternal Champion. Iron Age's last album was The Sleeping Eye from 2009. We send our condolences to Allison's family and friends.

Read more
In Memoriam 32 weeks ago
0 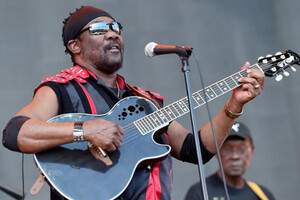 Toots Hibbert has passed away

Sadly, news broke today that reggae icon Toots Hibbert, singer of Toots and the Maytals, passed away. He was 77. Recently, he had been placed in a medically induced coma due to complications from Covid-19. Hibbert's family released a statement: "It is with the heaviest of hearts to announce that Frederick Nathaniel ‘Toots’ Hibbert passed away peacefully tonight, surrounded by his family at the University Hospital of the West Indies in Kingston, Jamaica. The family and his management team would like to thank the medical teams and professionals for their care and diligence, and ask that you respect their privacy during their time of grief. Mr. Hibbert is survived by his wife of 39 years, Miss D, and his seven of eight children.” The group just released their first LP in about 10 years, Got to be Tough. We send our condolences to Hibberts' family, friends, and fans.