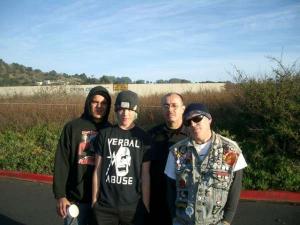 Contributed by brandoncruz, Posted by Justin August 14 years ago

Unrest Records has added long-running Oxnard punk act Dr. Know to it's Canadian stable. They join the roster of longtime friends such as the Dayglo Abortion and the Accused, who actually "borrowed" the name from the precursor to Dr. Know. Although we declared the band finished in 2003, they have continued to play shows around the area and are planning a new album for release in early summer '07. They're planning a "world tour" sometime this year too.