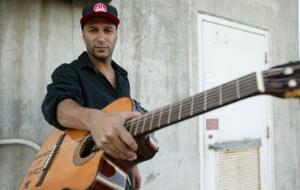 Via an Anonymous Source, Posted by Aubin Paul Sony Music 16 years ago

Rage Against The Machine's Tom Morello and Anti-Flag recently joined forces on stage to perform the entirety of Woody Guthrie's famous - and often misunderstood - classic folk song, "This Land Is Your Land." Morello and Anti-Flag previously worked together on their final Fat release, The Terror State.

As Morello explains, the song was originally a fierce protest song that protested class inequality and it was originally written in response to Irving Berlin's "God Bless America." Guthrie considered that song unrealistic and complacent.

Morello will soon release his first solo record under the name The Nightwatchman. The record is titled One Man Revolution and is due out April 27, 2007.