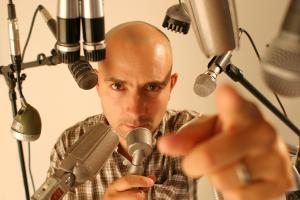 We were recently the recipient of an interview with Millencolin frontman and solo artist Nikola Sarcevic. Nikola is currently gearing up for the release of his sophomore solo album, Roll Roll and Flee. The record was previously released in Europe via Burning Heart but is now coming to North America via Freedumb Records.

The interview was handled by Caroline, of the French Canadian webzine, Punk Me Up.

How does it feel to be touring as a solo artist for the first time?

I just got back and I have to say that it was just great! The shows were a lot smaller than Millencolin shows of course, but the atmosphere was just terrific. It was just me and Henrik Wind playing so it was quite intimate.

A number of musicians helped you with your music. How was it working with all these different people in the studio? How did you select them? I mainly work with Henrik Wind, he plays pretty much 80 % of all the instruments on both of my solo albums. Than I just took in a good drummer and people who we knew could play different instruments. I think it's great to be able to work with different musicians. They all add something and makes the sound greater.

Sometimes I can write a song about something based on something I hear on TV, like a good one liner in a not so good movie or something I read in the paper or a just something funny my neighbour tells me over a cup of tea.

Can you tell us what your live performances are like?

They differ. I've been doing most of the shows with a full band but sometimes, like in Australia, it's just been me and Henrik Wind. For me its just been great to do something totally different to what I'm used to with Millencolin. The shows are quite intimate and spontaneous at parts and since the whole thing is kind of new to me I don't really know what to expect when I go up on stage and that's a cool feeling.

Why did you pick "Roll, Roll and Flee" as the title of the album?

The title is a quote that I found in a Swedish book I read. I liked the phrase and then I wrote the song. The person who said it was trying to describe how people are living today in modern western society. Later when I needed a title for the album, Roll Roll And Flee seemed to be the right one.

The first single "Soul for Sale" came with a music video. We see you drumming throughout the entire thing. Why is that? Why did you choose this instrument in the first place?

This was the idea the people who did the video came up with. I thought the idea sounded cool and we had great fun making it. I like it.

Have you ever thought of pursuing a solo career in Swedish or perhaps in both languages?

Not really, I'm so used to be singing in English and it comes very natural to me since most of the music I'm into is sung in English. But of course it would be cool to maybe try to write something in the future in Swedish. We'll see!

Have you ever been compared to any singer/songwriter with your solo-project?

Where do you draw your inspiration from during the writing process?

Lyrically it's not so much other music. It's more just stuff that I have in my head, thoughts and reflections of my surrounding. Sometimes I can write a song about something based on something I hear on TV, like a good one liner in a not so good movie or something I read in the paper or a just something funny my neighbour tells me over a cup of tea. 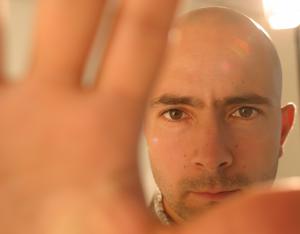 I find the lyrical content is slightly different from your usual range. They seem to be spiritually inclined somehow. Are there any spiritual or philosophical thoughts you would like to share with us?

I wanted the lyrics to differ from the first solo album and I think on Roll Roll I'm covering a wider perspective on life than just simple love stories. There's not much for me to add on the philosophical department, hopefully the songs speak for themselves.

Are there any events in your life that have inspired this questioning?

Mostly I write about stuff that is maybe sometimes hard to talk about so writing songs is a good way for me to express myself regarding these various situations and issues in life. It's my outlet and a way for me to speak my mind without getting interrupted.

I feel some vocabulary you use (i.e. Christians, heaven, saint, prayer, angelsÂ¦) reminds me of Christianity. I am wondering if it could have been influenced by Bob Dylan's Christian songs or is that personal to you?

Interesting theory! I like Bob Dylan a lot, but I never actually heard his "Christian albums" during the 80's. I'm not really religious so I'd say that it's rather a coincidence.

Who is John T.? Could he be also the same person you talk about in the songs "From Where I'm Standing", "Soul for Sale" and "thin air"?

Not really. John T. is a person who's supposed to symbolize the Soul of Sweden. Like a pattern of unwritten laws of how people should act and behave in this country. Social codes and norms and such; actually the assistant engineer in the studio was called John and at one point I thought that he thought that I was maybe singing about him. But he was a John R.