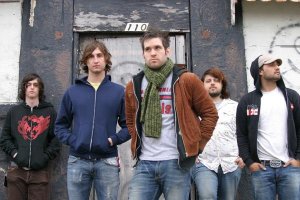 The Receiving End Of Sirens has set an August 7 release date for their forthcoming album The Earth Sings Mi Fa Mi, which they completed in April. The band had this to say about the release:

The title, The Earth Sings Mi Fa Mi stems from a book written by a late 16th century astronomical theorist by the name of Johannes Kepler and the publication just fascinated the band. Kepler's theory suggested that each of the 9 planets in our solar system produced tones as they orbited the sun. Throughout the orbit, Venus would stay a consistent note that was considered the 6th in relation to the rest of the planets. As Earth would shift its tonality, it would create the effect of the notes moving from the major 6th to the minor 6th and back and forth. This is where the "Mi Fa Mi" comes into action, symbolizing the corresponding syllables when singing a scale in relation to the notes of the earth {Do Re Mi Fa So La Ti Do}. Kepler further concurred that the Earth "singing" Mi Fa Mi could truly stand for Misery, Famine, Misery and ultimately, that is the song the Earth and Venus continued to sing. Misery, referring to an empty place and Famine, referring to the appetite or thirst for things.

The Earth Sings Mi Fa Mi is the follow-up to 2005's Between The Heart And The Synapse.

Videos: Saosin: "You're Not Alone"

Videos: Producers launch campaign save dynamic range, or, if it's too loud, you're overcompressed