by Aubin Paul Island 15 years ago

Sum 41 have posted artwork for their upcoming album. The record is titled Underclass Hero and is due out July 24, 2007. The album is the first from the band without founding guitarist Dave Baksh who left in May.

The band will be supporting the album on a variety of festival dates as well as some Warped Tour stops. The band released Chuck in 2004. 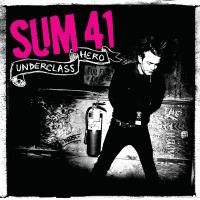