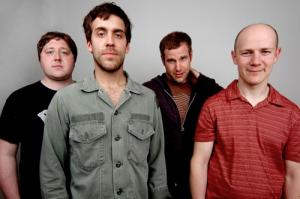 by Aubin Paul Flameshovel 13 years ago

With the news that Maritime is still active and planning the follow up to their acclaimed 2006 album, We, The Vehicles, we managed to finagle some exclusive information about the record including the art and track listing. The record is titled Heresy and the Hotel Choir and is due out October 16, 2007.

The disc is due out this fall and will feature 12 new songs. The artwork also reunites the band with Jason G. who previously played with the band members in Promise Ring. Along with members of that influential act, the group also includes veterans of Cap'n Jazz.