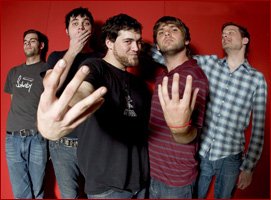 Contributed by SydBarrett420, Posted by Meg Reinecker Trustkill 15 years ago

Hopesfall vocalist Jay has announced via MySpace that the band recently dealt with line-up changes:

Some of you have been inquiring why we haven't been touring as of late. For the past few months we've made a major lineup change to tour our latest release "Magnetic North". After recording the new album a lack of desire to be on the road to support "Mag North" became apparent. We are all very proud of our accomplishments with this record. In assembling a new lineup my hopes are that we generate interest in a) the music my former band-mates and I created "Mag North" and b) the new material my current band-mates and I have begun to write. We have some exciting tours lined up including ventures w/ the junior varsity, the receiving end of sirens, and oceansize to name a few.

The band released Magnetic North in May.

Sparta to tour with Velvet Revolver

Music: Every Time I Die: "No Son of Mine"