"This little company began as a zine in April of 1993. After only three issues of the iconoclastic publication, the next step was a record label. The first release was a compilation with 14 bands from all over the country doing Embrace covers. It was entitled "Land of Greed... World of Need" and the proceeds from the record were donated to homeless shelters. This record, also known as Trustkill #01, came out in June of 1994, and since then we have been consistently putting out quality music. This website was the next big move and it was put up in January of 1997 after two weeks of messing around with Pagemill."

Gave Me the Clap

Too Pure to Die

Bullet for My Valentine

The Poison: Live at Brixton DVD 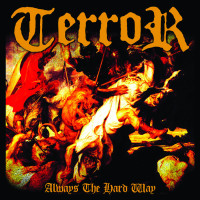 What Became of Me

Bullet for My Valentine

It Dies Today: "Thank You For Drinking"

New album &quot;Lividity&quot; from It Dies Today set for September 15, 2009

No Use for a Name guitarist joins Bleeding Through

This Is Hell leaves Trustkill

This Is Hell recruit new drummer

This Is Hell looking for drummer

This Is Hell / Dead Swans / The Blackout Argument (Europe, UK)