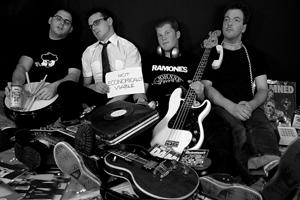 Our friend John B. Moore recently spoke to Dan Schafer of The Methadones about their new album, This Won't Hurt…. The long-running Chicago pop-punk outfit discusses the band, the scene and the cyclical resurgence of music trends.

Is this line up the same since Not Economically Viable? Itâs the same guys plus one. Weâre now a five piece. We added Ken Ortman. Heâs playing guitar and Iâm just singing.

[Power pop] never really got the attention it deserved. I also believe thatâs another genre thatâs going to come back and itâs going to be terrible. Thatâs my next prediction.

Is that easier for you?

Yes and no. Iâm still trying to get the swing of it. Itâs funny being up there because weâve played two shows and I donât know what to do with my hands. So, Iâm trying to figure out what to do when Iâm up there. I find that I sing better.

I always wanted a backing singer and I love the guys in my band, but they just canât cut it with backing vocals. So I got this guy and Iâve known him forever and heâs played in some bands and weâre around the same age and he sings and plays guitar great, so I asked him if he wanted to play.

You and some of your earlier bands were at the forefront of the pop punk scene in the 90âs. You live in Chicago now where there are a lot of bands now playing that type of music. Do you still feel a part of that scene?

It is a new generation. I feel connected to it somewhat. Iâm not really seeing a lot of it in Chicago, but I have seen it around the country. We did this festival in Baltimore and there were bands from all over the country that came out and I know what youâre saying. Thereâs definitely a resurgence of some sorts going on. I tend to think that genres come in circles. We saw it with garage stuff, we saw it with hardcore. I would say rockabilly has come full circle at one point or another. Swing music has come full circle at one point; so it doesnât surprise me that this is coming around again and then will fade away. Hopefully this time around thereâs more bands that will just concentrate on writing good material and weâll have quality over quantity from this genre. I think itâs a great genre if done well. If not, itâs just one-dimensional and crappy. Youâve really got to be careful when doing this stuff.

Are there any of these younger bands out there now that have impressed you?

Yeah. Definitely The Copyrights are amazing. Thereâs a band Leftovers that I think are pretty good. Weâve played with a lot of bands that I thought were good.

Your last record was a really fun covers album. Were there any songs that for one reason or another never made it on the record?

Yeah, I wanted to do "Youth Coup" by Holly and the Italians and we just could not pull it off. First of all itâs by Holly, a girl singer, and I just couldnât pull off a girl vocalist anyway.

How did you all decide what to cover? Was it, "Iâve always wanted to do a Cheap Tick songâ¦"?

I pretty much chose most of them. Some of them, some of the other guys in my band said "How about this?" I think our bass player said something about "Heart of the City" and I said "Yeah, I think we could pull that off," and I knew our guitar player wanted to do a Pointed Sticks song, because he really loves them.

We pretty much just tried to stick to stuff we thought that we could pull off. I think it was pretty successful. When we went down to practice the stuff like 95 percent of it felt natural, so I thought that was a good sign. And then the rest of it we just kind of worked out the kinks as we went along.

That was a project I wanted to do since the late 90âs. I never really had the chance to do it, so I said one day if Iâm ever in the right situation I want to do a cover record of all power pop songs. I finally had the situation to do it, so we did it. I can cross that off the list and move on.

It seems like a good time to put out a power pop record. 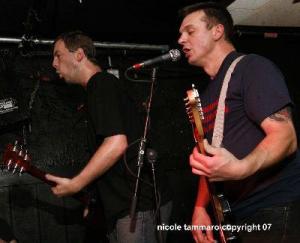 Yeah, that one guy in the Leftovers and the guys from The Copyrights, I know theyâre really big into this stuff too. Iâm noticing more and more people see the similarities between kind of what we do in spirit and what those bands did. They kind of slipped through the cracks, a lot of them. Some of them went on to do really, really well and other ones didnât and never really got the recognition that they deserved and they really wrote some great songs. I thought it was just one of those genres that never really got the attention it deserved. I also believe thatâs another genre thatâs going to come back and itâs going to be terrible. Thatâs my next prediction.

Letâs talk about the new album, This Wonât Hurtâ¦ How do you describe it to someone who hasnât heard it yet?

I think itâs what more people would kind of expect from me. I think itâs a little more melodic than the other ones. Maybe not Not Economically Viable, but definitely the two that were before that record. I was kind of trying something else for the first two records. Itâs kind of back to basics and I think the songs came kind of natural this time around. They were less labor intensive for sure and a lot of them were more spur of the moment, even like stream of consciousness with the lyrics. It came a lot quicker than some of the stuff in the past and I always find that to be a pretty good sign. We kind of just sat down and said what is it that we do best? With our first record I wanted to do something dark and even kind of fast, so I did it. With the second record, I wanted to do something as if The Dictators were more of a punk band, I did it. That is the kind of stuff I always wanted to do and then I just kind of started to go back to what felt natural with this one. This is kind of coming back to basics. Thatâs how I look at it. I think the songs just came out a little bit better because of that.

You had mentioned the lyrics came out easier. Were you writing about anything particular that was going on either around you or with your personal life?

Thereâs a lot less drama this time around. Some of those other records, I really had a lot of shit going on. Like I went through a divorce, I was having problems finding work, I was laid off and the poor economy in 2002.

I really had a lot of shit that I was really, really angry about and this time there was still stuff on my mind, but Iâm not really as angry or depressed about it. Itâs more like, "Okay, this sucks, but we can move on." Maybe thatâs just part of getting older.

I read somewhere were you had played a show recently with Ben Weasel.

I played a couple of songs with him at the Baltimore Fest a couple of weeks ago. I went up there and we did a Riverdales song. It was great. It was really a great festival.

Have you ever talked about getting either Screeching Weasel or The Riverdales back to do an album or a tour.

Of course it always comes up. But thatâs a question for Ben. If Ben wants to do it, Iâd love to be a part of it. So itâs more of a question for him. If we ever work something out I think it would be a lot of fun. 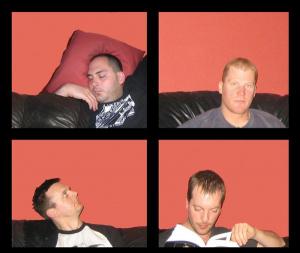 The Methadones just played Canada for the first time in awhile. We played Vancouver.

Why had it taken so long for you guys to get to Canada?

Our bass player had a felony from when he was like a teenager, so it was on his record forever and he had to get it pardoned and everything. It was just one of those things that took him awhile to do. In the past we tried to get over. We tried to say we were tourists and we always got stopped. This time around he contacted some people over there and got it expunged from his record, so everything was fine and we went over and played Canada and it was great.

Whatâs next after the record comes out?

For now, weâre going to do this fest in Gainesville in October and probably do some stuff around that. Weâll lay low until then and try to hit some towns down south. Then thereâs Riot Fest which is here in Chicago, weâre going to be a part of that as well, then from there I guess weâll just start planning another tour probably for late winter, early spring, something like that.