Countdown to the Fest 6: Armalite 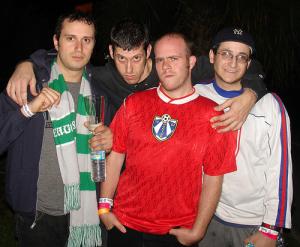 As an official sponsor of this year's Fest 6, we've decided to start our own "video countdown" to the festvities, which takes place in Gainesville, FL the last weekend of this coming October. Each week we will bring you a performance from last year's event, but will showcase the bands returning to this year's extravaganza.

This week we present Armalite, which is the side project of Adam Goren from Atom and His Package, and and some dude named Dan Yemin who plays in some other bands and is reportedly an expert alligator wrestler.

Armalite - live from the Fest V from Chris Moran and Vimeo.