The Good, The Bad & The Queen to perform at “Love Music Hate Racism” 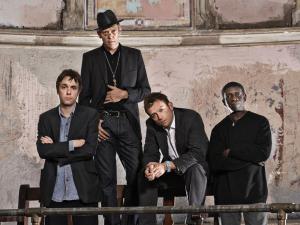 by Aubin Paul The Clash 14 years ago

The Good, the Bad and the Queen, which includes members of Blur and the Clash have announced plans to perform at an upcoming Love Music Hate Racism event on Sunday.

The event will be presented by Jerry Dammers (of the Specials) and the band will close out the evening. The FREE concert is due to take place at London's Victoria Park on Sunday. Other bands performing will be The View, Hard–Fi, Get Cape. Wear Cape. Fly, Roll Deep and Jay Sean, plus Babyshambles' bassist Drew McConnell's "other band" Helsiniki feature a few guest appearances.

Music: Down To Nothing : "Watered Down"