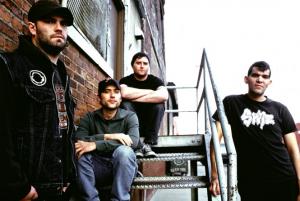 Via an Anonymous Source, Posted by Ben Conoley Anchorless 14 years ago

Anchorless Records has finalized the track listing for their forthcoming Johnny Cash tribute album. All Aboard: A Tribute to Johnny Cash; To Benefit the Syrentha Savio Endowment will feature contributions from the likes of The Bouncing Souls, Chuck Ragan, Gaslight Anthem, Smoke or Fire and more.

The album will be released on both CD and vinyl with the later version featuring a bonus Ben Nichols track. The liner notes are also set to include quotes from each band or artist about Johnny Cash and his impact on their lives.

SSE is a registered non–profit providing assistance to underprivileged women with the costs associated with breast cancer treatment. They are best known 'round these parts for their Shirts for a Cure campaign. The liner notes will include quotes from each band/artist about Johnny Cash, and his impact on their lives and musical careers.

Music: Down To Nothing : "Watered Down"

Vinyl File: Fucked Up's discography; win a test pressing from In the Red