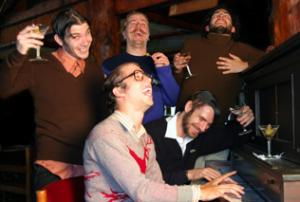 Contributed by sceneupdates, Posted by Ben Conoley Interviews 14 years ago

Punknews user Sceneupdates recently sat down with Nathan Winneke, vocalist for HORSEThe Band. The band is currently in the middle of a world tour (in the literal sense) in support of their 2007 album A Natural Death.

So to start off like many interviews, what is your name and what do you do in HORSE the band?

My name is Nathan and I am the vocalist of HORSE the band.

Chris Prophet wasn't in the band very long. From what I understand a year or so. What was the reason behind him leaving?

Aside from being a really nice guy and a good drummer he just walked in without any experience and that wasnât so bad as his inability to learn from his mistakes. Long answer short - the women and the drinking was accidentally number one.

And how did you hook up with Jon Karel?

We did our Radiclysm tour and had the pleasure to play with The Number 12 Looks Like You and he happened to not only be an amazing drummer but an A-list kind of guy as far as humor and tour ethic.

When you announced your world tour people thought you were joking, but then dates started appearing. What was the idea behind the whole tour and who helped/is helping with the bookings and finance?

When we announced the Pizza EP everyone thought we were joking and then it actually came out. Maybe the world will one day grow up and realize that weâve never made a joke out of our music. We may laugh and have tons of fun but the fact people perpetually disrespect our goals and ideas shows that most people are too limited to even realize someone might actually come through on an amazing abstract idea. We wanted to play around the world. The people who thought it was a joke just couldnât fathom it. Thatâs just small minded. This whole tour was booked and financed by our guitar player, David Isen. He is a genius. Literally.

And what about the DVD? What will be on it? Any details about the so called 'sitcom' which will be included?

The DVD will just be a documentary about our adventures around the world. Sitcom means 'situational comedy' and we arenât making one of those. We actually have a deal with a reality TV show company to follow us and experience these exotic travels through our eyes and get to know us and laugh, cry and be pissed the fuck off with us. It wonât be included on the DVD. It will be on TV.

Can you explain in detail the history of the song The Black Hole. I've heard a pretty interesting story, but have found nothing on the internet to back it up.

The song Black Hole was written about the album The Mechanical Hand. Itâs the last song and it sums up all the others. That song references all the other songs on the album. You have to pay attention to notice.

How does it feel to know Erik has his own Wikipedia page and none of the other members do?

I have my own. Did somebody delete it?

[Added after the interview: None of them actually have a page now] Being associated with the music of Nintendo, I'm assuming you have a Wii?

I do. I canât wait for Maro Kart Wii.

What would be your most hated question during interviews?

Here are a couple…..
1. Why are all your songs about Nintendo -- answer: They aren't/
2. Whatâs your favorite video game -- answer: Please stick to music.
3. Whats your (insert something about pizza)?-- answer: I don't even like pizza that much.