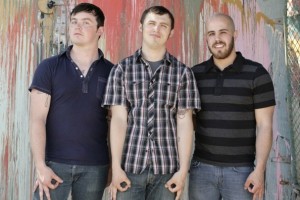 Our latest series of Dispatches feature Broadway Calls as they make their way through Europe with Alkaline Trio. The band released Broadway Calls in 2007 and more recently contributed to a split with Teenage Bottlerocket.

Hey busters. Ty here. Last week we started our first ever full European tour. We've been looking forward to this trek since October, when I sent Dan from Alkaline Trio a text asking if they had room for us. He said yup, and made it happen. See kids, that's all there is to it. Ask for the phone number from one of your musical heroes while he or she is drunk, and beg them to take you around the world. Pretty easy.

So we arrived in Belgium on January 22nd at 7 AM. We nervously smuggled 300 shirts into the country, and then met our driver Thomas. He's quiet, tall, and doesn't think we're funny. 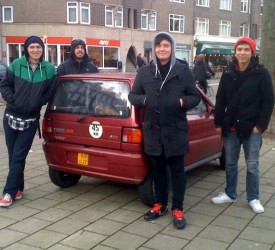 We showed up to the venue at like 9 AM which is way too early. Walked around downtown Brussels looking for a bank to exchange our money. Went back to the venue and loaded in. Spent the rest of the day catching up with the alk3 band and crew, which we are all very fond of. Show went great. Venue was massive. They served us some amazing food, and both bands just sat around, listening to Matt and Derek discuss fucked up vampire movies, and talked about how Ryan Adams is an asshole cuz he writes great songs like everyday. It's weird playing really big rooms for us. It took a few shows to get comfortable. I'm pretty stoked on it now though.

The Alkaline Trio dudes have always been, and continue to be a huge influence on us, so them and their crew have really been helping us out.

I don't wanna turn this into a "rocknrolllistentomyawesomedrugstory"blog, but seriously we went to Amsterdam, and I ate drugs, and had an amazing time. ClichÃ©? Yes. Would I do it again? Goddamn right. That's all I'm gonna say about that.

Our friend Chelsea who we met through Comadre came out, cuz it was her birthday and she lives in Rotterdam now. I think she had a lot of fun and it was cool to see her. Also, I forgot to mention that for the first leg of the tour it's just two bands. Us and alk3. That's pretty rad, cuz the shows are short and sweet, but in Amsterdam this band called The Tenement Kids opened, and everyone on punknews should get into it. They sounded a LOT like Hot Water Music, and they were really nice guys.

I think I'll leave it at that for now. We're having a blast. Eating well. Making fun of our bass player. The usual.