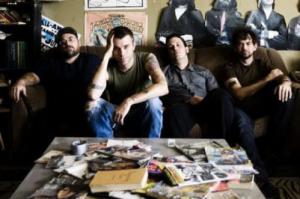 Sabot Productions has announced plans to reissue Lucero's first five albums on 180 gram vinyl. The records will be packaged with free MP3 download coupons. Nobody's Darlings was released today, to be followed by Rebels, Rogues, & Sworn Brothers in the fall. That Much Further West, Tennessee and their self-titled record will arrive throughout 2010.

Music: Dave Nassie confirms No Use For A Name departure