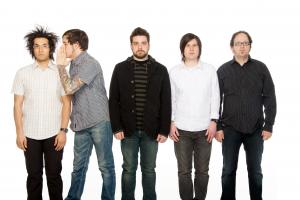 Via an Anonymous Source, Posted by Bryne Yancey Sony Music 12 years ago

Motion City Soundtrack has revealed the title of their fourth LP and first for Columbia. According to an interview on MTV News with frontman Justin Pierre and guitarist Joshua Cain -- an interview conducted by the album's producer, Mark Hoppus -- the record will be titled My Dinosaur Life. No word yet on a track listing or release date, but we'll keep you posted.

The band last released Even If It Kills Me in 2007.