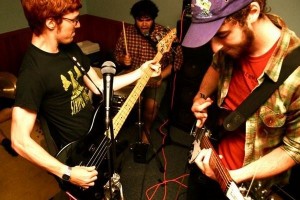 Brian: I saw these guys open for Bridge and Tunnel at an apartment show a month or two ago and they fit in the lineup well in a weird way, while remaining totally their own band. If you like your "punk" really frantic, really noodly and a bit screamy and desperate -- think early Hot Cross or the more dynamic L'antietam stuff -- Boost is a good way to go. As far as I can tell, the band has thus far released a cassette split with a band called Fine Lines, and a three-song summer tour CD-R. If you like what you hear on their MySpace, feel free to download their brief discography here free of charge. They're seemingly on a brief hiatus until spring 2010 (college kids?), but it would definitely be cool to see where they take this sound next.