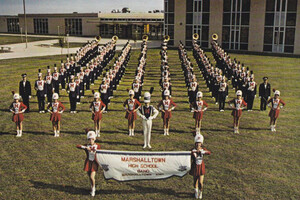 For the past few years, we've been doing "band weeks" at Punknews where we focus on a band or artist for the entire week. Eventually, we plan to have a section dedicated to the band weeks on the site. But, until then, here's a list of all of the band weeks we've done so far. Check out all of the previous weeks below! also, what band should we cover next? 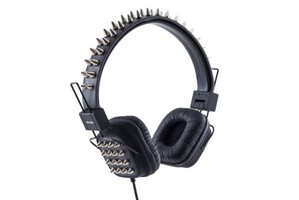 Five Punk and Hardcore Podcasts to Get You Through Social-Distancing

The Quarantine is in full effect now! People are crawling up their walls! To keep you somewhat sane, Punknews' Mike Musilli has rounded up a selection of choice punk and hardcore podcasts to help you bide the time. What else have you got to do? Check out his picks below. 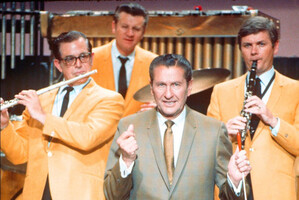 Once a year at Punknews, we like to pick out a few cool new bands and shine a spotlight on these up-and-comers. This year we've got a great crop of bands that exemplify just how punk is rapidly evolving into something new, fresh, and exciting. 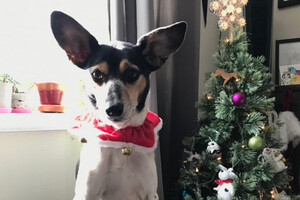 Jon Syverson of Daughters and Philip Jamieson of Caspian list their favorite records of 2019!

In FURTHER continuation of our annual guest Best of Lists, today we have Mr. Shea to present to you lists from on Jon Syverson of Daughters and Philip Jamieson of Caspian.

Daughters released You Won’t Get What You Want in 2018. Caspian released Dust and Disquiet in 2015. Check out the lists below! 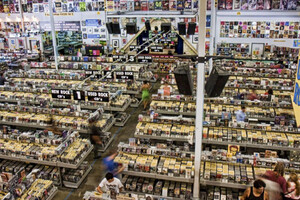 Check out these cool record shops!

This Friday is Record Store Day Black Friday and we sure do love record stores here at Punknews. At the hollowed record store, there's hot new releases, cool rarities, and weird stuff that you didn't even know existed. You should go pick up some of those sweet discs this Friday, and pretty much every week of the year! To guide you on your way, we made a list of some of our favorite record shops below. Check it out. 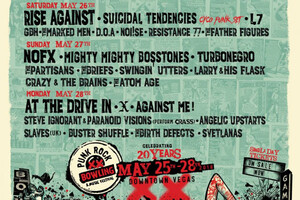 Check Out These Cool Up-And-Comers at Punk Rock Bowling 2018!

We’re only a couple months out from Punk Rock Bowling 2018! For its 20th anniversary, the festival has announced an amazing line up as well as a ton of awesome club shows. Obviously, we know performances by punk rock heroes like Rise Against, NOFX, At The Drive-In, Against Me!, X, Suicidal Tendencies and The Mighty Mighty Bosstones are going to rule, but what about the new and up-and-coming bands that are playing the event, too? Well we got you covered. Check out the list of the staff’s picks below and feel free to add your own picks in the comment section, too! 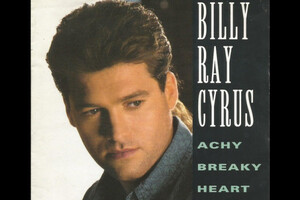 Here Are Some Cool Records to Check Out in 2018!

It's only February and ALREADY there is a huge stack of cool records coming out! 2018 is just packed to gills with exciting new releases from all over the punk spectrum - hardcore, art-rock, indie-punk, avant-garde, weird stuff- it's all there baby! To that end, we've put together a list of cool records that are being released in 2018 (or that will hopefully be released in 2018) that we think you should check out. See that below. As always, this is not "the best new records of 2018" or anything. If you think something is cool, please add it to the list in the comment section, too! 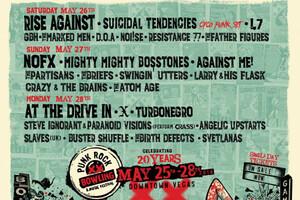 Check Out These Veteran Bands At Punk Rock Bowling 2018!

It’s beginning to be that time of year again — the countdown to Punk Rock Bowling! Like every year the festival has a majorly stacked line up full of great veteran bands and up-and-comers. The 2018 line up has a very special set of long-running bands that the staff think you should not miss if you are going to the festival, so we listed some of our favorites out for you. Be sure to add your picks in the comment section below. 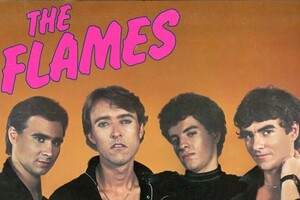 Listen to the first ever official release of the Flames long lost LP from 1980!

Well, our two and a half year journey has led right up to this moment! This Friday, Punknews is absolutely thrilled to be releasing for the first time ever, the long lost album recorded by The Flames in 1980!

You can read the whole story right here, but the short of it is that editor John Gentile found a cool looking promo record in the discount bin at Jupiter Records in Wilmington, Delaware. He took it home and gave it a spin- and the album was a really, really cool pastiche of rock, power-pop, punk, and new wave that dealt with some really heavy topics like marital breakdown, depression, fighting for your art in the commercial world, and having resolve to make it through. The album was recorded in 1980, but because lead vocalist Michael J. Richards was having a tough time during recording, he gave up on the project and moved away without ever releasing the album.

Now, 37 years later, we are so pumped to be releasing this gem for the first time ever, along with two bonus cassette rehearsals and 10 tracks that Michael recorded for himself from 2009-2013. It's also remastered by Bob Vielma (Shinobu) with Michael's approval. The album is out Friday and you can buy it right here!. You can also hear the whole lp and all the bonus tracks below, right now! 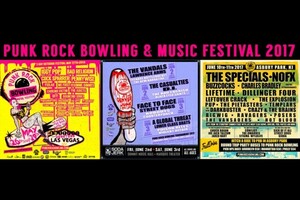 Check Out These Veteran Bands at Punk Rock Bowling!

One of the cool things about Punk rock Bowling is that they always bring out a fair share of the cool, new bands. But, they also always are sure to pay respect to the legends. An this year, we are getting a set from THE legend himself, Iggy Pop! To that end, we've put together a list of cool long-running bands that we think you should see at Punk Rock Bowling. By all means, add your picks in the comment section below! 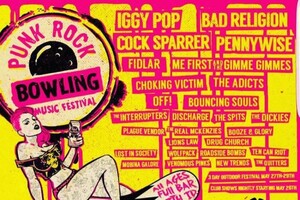 Check Out These Cool New Bands at Punk Rock Bowling!

Well, Winter is receding while Spring is advancing and that means Punk Rock Bowling is right around the corner, baby! (Pssst… we're sponsors!) And no doubt, there are A LOT of punk rock heroes playing- the main man himself Iggy Pop!, Bad Religion, Cocksparrer, Buzzcocks, NoFX, The Specials and a lot more. BUT, there are also a TON of really, really cool new, up and coming bands playing the fest. To that end, we've highlighted just some of the cool new and new-ish bands playing PRB. Check out our selections and feel free to add your own picks in the comment section, below! 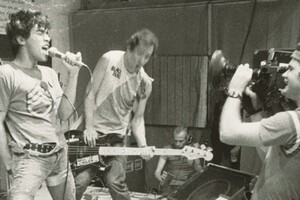 “What Black Flag Means to Me”

Black Flag week is rolling along now! For today's feature, we asked a bunch of artists about how Black Flag affected them… for better or for worse… We talked to Jack Terricloth, Ara from the Slackers, Jarrett of Screaming Females, 50% of Bad Cop/Bad Cop, Chris from Crazy and the Brains, and a whole bunch more! Check out what a lot of really cool musicians had to say about those four bars below! 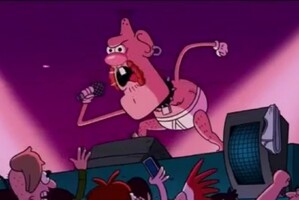 16 Punk Veterans Still Kicking Out the Jams in '16

At the start of every year, we like to do a post on the cool new bands just getting started. But, near the year's end, we like to counter that article with a list of legends that are still doing their legendary thang. Perhaps moreso than other genres, punk is a genre where long running bands can release some of the best, if not the very best, albums of their career. For proof of that, you need look no further than 2016 where A LOT of punk heroes straight up released some killer, killer records.

So, check out our list of 16 (or so) bands that have been around for 25 years or more, that are still playing live, that released a record this year. As always, this isn't intended as "the objectively best punk veterans of 2016." It's just a list of long-running bands that we think are cool. By all means, post your picks below. 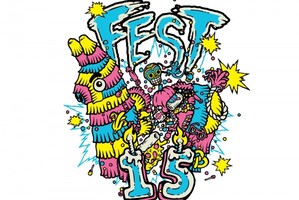 Fest vets to catch at Fest 15

Your bags are probably packed by now, because we're only a few days away from Fest 15. While we always encourage you to take time out of your busy schedule to catch those under the radar acts that deserve your support, the truth is there are bands you've seen before, and will see again, that you just can't miss. With that in mind, the Punknews staff has curated a list of veteran acts that are worth a slot on your Fest schedule. Fest 15 kicks off this Friday, October 28, and runs through October 30. You can still pick up passes here.

Under the Radar Bands to see at Fest 15

It's that time of year again. Fest 15 is right around the corner, and that means it's time for us to start helping you get ready to make the most of the best weekend of the year. We're kicking it off the way we usually do, by highlighting some of the lesser-known acts you can't afford to miss. If you've been living under a rock for the past few months, Fest 15 takes place Oct. 28-30, 2016 in Gainesville, Florida. You can find details on tickets, the full lineup, schedules and more here.