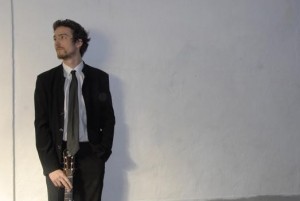 There are two important things to note about Frank Turner. One, he's really good. Two, he really likes to talk. Luckily for myself (Frank Corva), and you - the reader, the stuff he likes to talk about is really awesome. In the final part of our Frank on Frank action we brought things up to the present. Well known for his witty, yet sincere lyricism, Turner sheds some light on the evolution of his songwriting as he showers his heroes in praise and adulation. He also talks about what it means to mean it and why he owes Chuck Ragan a beer.

Turner's debut Love, Ire and Song is being re-released in North America by Epitaph Records. Meanwhile, its followup, Poetry of the Deed is due on the same label in September.

So, solo Frank Turner started about four years ago?

Yeah. The funny thing is Iâm not convinced I thought that I would still be doing this. Basically, I didnât want to be in a band again. I didnât want to have to ask everybody elseâs fucking permission. Also, we sort of went professional with Million Dead about six months before we broke up. I was pretty cool with not having a day job and being on tour the whole fucking time. So, I was like, "I wanna to stay on tour, I donât wanna fucking be in a band. I guess Iâll do some shows on my own." There are only certain types of music you can play when itâs just you and the guitar. Iâm a big lyrics person. The lyrics I used to be obsessed with when I was in Million Dead [were] like, do you know Chris Leo from The Van Pelt and The Lapse, from Chicago? This is like â96-â97. They did a reunion show at SXSW this year. I actually cried.

I was pretty drunk. [Laughter] They finished with "Speeding Train" and I thought I was gonna die. So, he was this really complex, intellectual lyricist. [However] I had this massive kind of revelation coming across, in particular, Townes Van Zandt. He was a Texas singer-songwriter out of the â70âs. He was a classic kind of tragic fuck-up alcoholic country singer. [So, I was] obsessed with lyrics [like] The Van Pelt singing, "Letâs make a list so it feels like weâre accomplishing something." Itâs wordy and dense and sort of slightly overbearing. Then Townes Van Zandt picks up a guitar and sings, "There isnât much I havenât tried, fast living, slow suicide." Itâs short and simple. It rhymes and itâs perfect. Iâm actually planning on getting this tattooed on my forearmsâ¦ This is the fucking lyric that sums of my view of life, itâs a Bob Dylan lyric [where] he says, "Iâm leaving tomorrow, but I could leave today." Thatâs from "Song To Woodie." What a fucking statement. So, I just got so much more obsessed with poetry, which instead of kind of bamboozling you with fucking imagery and information and words, it just takes the simplest thing. Another big one for me, do you know John K. Samson? He sings for The Weakerthans. That guyâ¦ motherfucker. I gotta meet that guy and buy him a beer. It was through listening to him that I realized what it was I liked about lyrics, when you take something small and personal and make it large and universal. That right there is what good lyrics are. He says stuff like, "Memory will rust and erode into lists of [all] the things that you gave me: [a blanket, some matches], this pain in my chest, the best parts of lonely." Itâs just like, "I have no fucking idea what youâre talking about, but I totally do know what youâre talking about." Iâm the first person to say that Iâm still [trying to get] what I am in writing this kind of music - Iâm practicing. The fact is that basically, I really hope Iâm right in doing this. I feel like Iâve kind of stumbled into my mojo. All the sudden it was just like, (Turner exhales,) "I really like this." Not only do I like it, but around the UK, when I started touring, people liked it, too. I mean, slowly, but they did. My next line of headline shows in the UK are sold out [Laughter], which is crazy. The only reason I say that is itâs just like, people are into it, people are paying attention. Yeah, so I guess that was the thing, itâs just that something that was initially an experiment and partly a kind of necessity then became a reality of like, "Wow, I can keep doing this," right up to the fucking Roseland Ballroom (the New York City venue where the interview took place after his opening slot for an Offspring show.)

I would love to be a misanthrope, but this is the thing I get from Springsteen, who I really shouldâve talked about more, because I think heâs the greatest singer-songwriter ever - all time, ever.

Your cover of "Thunder Road" is really good by the way.

Thanks. Springsteen perfectly straddles the vibe between not being overly arrogant, but just stating the fact that you know what, you can be what you wanna be if youâre prepared to put the work in. One of the most imprisoning things that human society has come up with is low expectations. What I love about Springsteen and what I feel blessed to have come to experience in my life and what Iâd love to share with other people [is that] if you love it enough to put the work inâ¦ If you wanna be a vet, be a vet, if you wanna write a bookâ¦ If you wanna be the manager of a fucking water utility company, you can fucking do it. For the egalitarian in me itâs so important to say that I donât regard myself as particularly talented. When I first started singing in a band I couldnât sing to save my fucking life. I just practiced, pushed myself, practiced, practiced, practiced. I did my first recording when I was 12 years old. Itâs piss awful and every single person who has a copy will get killed. I wasnât fucking Jimi Hendrix with a guitar, and I wasnât fucking Jeff Buckley and Iâm not Craig Finn who sat down and wrote the best fucking lyrics of all of history, ever. My God, I love The Hold Steady so fucking much. (He gets up to show me a lyric from a Hold Steady song tattooed on his back.)

Incredible. He comes from the same background as you, no? He used to play in hardcore bands.

I first heard about / saw you on the Revival Tour. That was basically your first legit tour in the States, no?

Iâd done some tours here and there. Mostly it was all UK, but Iâd done some American dates before. I owe Chuck (Ragan) a beer. I can pretty much trace the Epitaph deal happening back to Chuck. He started the conversations that ended in me signing a deal with Epitaph. I love Chuck anyway because Iâm a huge Hot Water Music fan and, to be honest, Iâm actually a bigger fan of his solo stuff and heâs a super nice guy. Iâm sounding totally gay for him right here - which I totally am!

That works out well then.

[Laughter] Heâs helped me so much [and] Iâll tell you what, Iâll say this without mentioning any names or being down about anybody, but this whole thing thatâs happened over the last few years of punk guys playing acoustic musicâ¦ Well, the thing is there are some people who are basically just playing pop punk without a drum kit. I mean, itâs kind of okay, but to me itâs pretty fucking boring. What I particularly love about Chuck is heâs got his punk rock background, but heâs not just playing punk songs. Heâs really fucking engaged in traditional music as a concept. I have so much fucking respect for that. Heâs refuses to patronize the style. Heâs taking it seriously. Yeah, so I did four or five shows on the Revival Tour last year, which [were] just the most fun. The whole thing with the way the Revival Tour is structured, [the] not so clear sets, everyone on stage in the beginning, not this whole fucking ego bullshit, that really taps into a lot of things that I think about. Basically, after doing my short run on the Revival Tour last year I saw Chuck at the end of it and he was just like, "You are so in tune with what weâre trying to do here." I was like, "Yes, I fucking am!" And he was like, "I canât believe you only did this many shows. I wish you did more shows on the tour." And he said, "Well, next year." You know, everybody fucking says "next year" and nothing happens and then he fucking calls me up and heâs like, "Yeah, alright, here are the dates." I was like, "Fucking A, man." So, I think the Revival Tour is excellent and I canât fucking wait to do it again [this] year.

So, have you accomplished a lot of the things you set out to when you started playing music as a gung-ho teenager?

Iâve checked a lot of boxes that I made out when I was a kid. I always wanted to play The Garage. I played Brixton Academy solo, which is crazy. Iâm going to be headlining Brixton in March next year, which is insane. The worldâs gone mad, itâs official. So, I mean, Iâm still an ambitious person. Iâm still hungry. There are still things I want, [but] itâs important to say that if I broke my vocal chords tomorrow, broke all my fingers, got told by the CIA that I could never play a show again, however you want to think about it, Iâd be happy with the things that Iâve done so far. Itâs so important to me to stress that I remain a fucking wide-eyed starry little kid. Itâs just important to me to keep being shocked by the things that happen to me. I think the minute you stop being shocked, you turn into Bono, and no one wants that. [Laughter] Bono is the archetypal guy who isnât bothered about shit.

So, whatâs the opposite end of the spectrum from Bono then?

Have you ever met him?

No, but heâs played one of my songs on his radio show, like, more than once - "Back In The Day," heâs played it twice. That was on Indie 103 in LA. I think itâs folding now, but this was last year when it was [still] going strong. I know one of the DJâs [there], so I actually wrote a letter to Rollins, handwritten, and I told him to leave it on Rollinsâ desk. It was just like, "Dude, I donât fucking expect a replyâ¦ Youâre a fucking hero to me." Joe Strummer, Henry Rollins, Bruce Springsteen - thatâs my trinity.