Billy Hopeless sticks a fork in the Black Halos 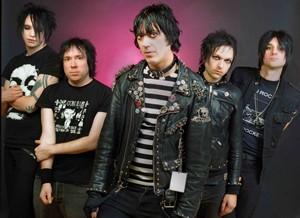 Contributed by burningtrash, Posted by Adam White 13 years ago

In early August frontman Billy Hopeless commented on the future of Vancouver's The Black Halos. He explains that while he could go out and rebuild the band with new players (he mentions SNFU, Social Distortion and D.O.A. as examples) he'd rather start anew. Hopeless comments "At the best the Halos was always a band that I would have loved to go see and hear at worst it was everything that I despise and I battled to keep it exciting as hard as I could… I believe with the line up I'm gathering that we will be able to achieve the same if not greater admiration from myself and hopefully all of you."

Billy's new band is The Bonitos featuring members of Cristol Pistol, Saddle Sores, the Daggers, and Black Diamond. The group doesn't have any music online yet, but they're promising a New York Dolls, Dead Boys and The Stooges inspired glam-punk sound.